Welcome to program 110 of VOA Radiogram from the Voice of
America.

Here is the lineup for today's program, all in MFSK32 except
where noted ...

JOHANNESBURG - South Africa is beginning a new love affair with
vinyl records, after they were discontinued in the early 1990s in
favor of CDs, and more recently for electronic MP3 downloads.
Vinyl record stores are opening in most major cities.

The vinyl albums at Benjy Mudie's Johannesburg store, Vinyl
Junky, are considerably more expensive than CDs or MP3s. Prices
range from the equivalent of a couple of dollars to about 35
dollars for a pristine copy of a classic rock album.

Yet Mudie, a veteran music consultant and record label boss, says
his sales have spiked a "hundredfold" in the past year.

He says it is young South Africans who are driving the "vinyl
explosion."

"It's become hip to have records again. A lot of young people are
the bulk of the people that buy vinyl now, people under 30 that
were only being born when vinyl went into decline in the
mid-80s," he said

At the Record Mad shop in northern Johannesburg, owner Kevin
Stuart got the idea to go into business a few years ago when he
was strapped for cash and started selling his vinyl collection
from home. Demand was so great that he saw an opportunity and
opened the store.

"I get a lot of young people coming in here and saying, My dad
just gave me his record player, a bunch of records and a record
player, so I'm expanding on that. I think it was definitely
driven by media and by reviewers and I think people just got
really, really sick and tired of MP3s," said Stuart.

Mudie says youngsters are discovering music their parents, and
even grandparents, grew up with, and they want to listen to it
just like their elders did: on vinyl.

"They're buying the classics; they're buying [Led] Zeppelin and
The Doors and [Jimi] Hendrix and The Beatles and the [Rolling]
Stones," said Mudie.

Stuart also noted the family connection as playing a role in the
appeal of vinyl.

"I think a lot of people can still relate to records: My dad had
this; my mom had this; ‘I grew up listening to Noddy on vinyl' or
Led Zeppelin, or AC/DC or whatever it was," said Stuart.

According to Mudie, increased demand for vinyl is linked to young
South Africans realizing that the "age of pop idols manufactured
by TV" isn't so great after all.

"Young people are looking for something different. They're tired
of being force fed by contemporary radio and by record companies,
force fed a diet of people that all sound the same," said Mudie.

But at the heart of the vinyl upsurge, he said, is the "fact"
that music simply sounds better, and feels better, on vinyl.

"Vinyl to me sounds warmer and it has depth, it's got echo, it's
got soul, whereas digital is very clear, very precise; very
Teutonic. But it's soulless! Vinyl is visceral! It's a visceral
experience. You take it, you pick it up; it's something to look
at. You can't look at an MP3," he said.

Stuart said the "rebirth" of vinyl is resulting in a rebirth of
music in South Africa.

"People are connecting with music again in a way that our parents
used to, our hippie fathers and our acidhead mothers!" he said
with a laugh.

Stuart does, however, expect the "hype" around vinyl to fade in
the near future.

But he added that it has been "resurrected forever," and South
Africans are all the better for it.

Sun and wind are seen as the most abundant sources of clean,
renewable energy, but as many 'ocean-hugging' countries know, the
energy of ocean waves is also both powerful and endless. Looking
for the most efficient ways to capture that energy, the U.S.
Department of Energy has announced a $1.5 million-prize
competition for new ideas.

The department estimates that waves and tides along the U.S.
coasts generate 1,420 terawatt-hours of energy annually. That is
equal to the output of more than 330 nuclear power plants.

Unfortunately, the efficiency of today's technologies for
capturing that energy is only about 20 percent, too low for the
investment to be economical, says Jose Zayas, director of the
Wind and Water Power Technologies Office at the Department of
Energy.

"We're really looking to step-change that into the high 30s-40s
[percent] and I think… once you achieve that, then the economic
competiveness of this industry really comes to life and that's
really the target that we are shooting for," says Zayas.

To encourage development of new technologies, the Department of
Energy has launched a nationwide competition, called the Wave
Energy Prize.

Developing new devices to capture wave energy can be a challenge.
The environment in which wave capture machines must operate can
be very harsh and unforgiving, with crushing blows of notoriously
corrosive salty medium.

Competition organizers expect that most of the new ideas will be
coming from existing energy companies, but also from the academic
sector and research institutions.

Zayas says testing of the proposed technologies will be done in
several phases.

"We would have 1/50th scale testing where we would do the first
fundamental evaluation of their performance, as well as making
sure that they are in a pathway that can assure them success
towards a prize. We will then down-select again, and near the end
we will have about 10 teams ... it's our hope to be competing at
1/20th scale," says Zayas.

Testing of the scaled models will be done at the U.S. Navy's huge
indoor testing pool, with machines capable of generating
ocean-size waves.

Zayas says the models will not be required to produce electrical
power. Instead they will have to prove how much of the wave
energy they can capture.

"We are looking at how the companies, architectures, have the
ability to capture that energy and, of course, through high
degrees of data analysis, acquisition sensing, actually quite
easy to convert that mechanical kinetic energy into electrical
energy, giving us confidence that at least the attributes of the
machine are in line with the objectives of the prize," says he.

Zayas says the ultimate goal of the Wave Energy Prize is to
inspire a new set of power-generating technologies for the 21st
century. Developers of the three best performing devices will be
awarded prizes ranging from $250,000 to $1.5 million.


Norberto in Italy suggested that I share with VOA Radiogram
listeners this information about Expo Milano 2015.

Expo Milano 2015 is the Universal Exhibition that Milan, Italy,
will host from May 1 to October 31, 2015. Over this six-month
period, Milan will become a global showcase where more than 140
participating countries will show the best of their technology
that offers a concrete answer to a vital need: being able to
guarantee healthy, safe and sufficient food for everyone, while
respecting the Planet and its equilibrium. In addition to the
exhibitor nations, the Expo also involves international
organizations, and expects to welcome over 20 million visitors to
its 1.1 million square meters of exhibition area.

A platform for the exchange of ideas and shared solutions on the
theme of food, stimulating each country's creativity and
promoting innovation for a sustainable future, Expo 2015 will
give everyone the opportunity to find out about, and taste, the
world's best dishes, while discovering the best of the agri-food
and gastronomic traditions of each of the exhibitor countries.

Feeding the Planet, Energy for Life

"Feeding the Planet, Energy for Life" is the core theme of Expo
Milano 2015. This common thread runs through all the events
organized both within and outside the official Exhibition Site.

Expo Milano 2015 will provide an opportunity to reflect upon, and
seek solutions to, the contradictions of our world. On the one
hand, there are still the hungry (approximately 870 million
people were undernourished in the period 2010-2012) and, on the
other, there are those who die from ailments linked to poor
nutrition or too much food (approximately 2.8 million deaths from
diseases related to obesity or to being overweight in the same
period). In addition, about 1.3 billion tons of foods are wasted
every year. For these reasons, we need to make conscious
political choices, develop sustainable lifestyles, and use the
best technology to create a balance between the availability and
the consumption of resources.

Reflection on the Expo theme becomes a time of sharing and
celebration, involving conferences, events and performances,
enhanced by the presence of the mascot Foody and the cheery
characters who accompany him. Every aspect and every moment of,
as well as every participant at, Expo Milano 2015 define and move
forward the chosen theme: Feeding the Planet, Energy for Life. 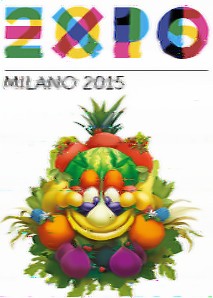