The car radio on a BMW X1 recently purchased in Italy includes
the 49M shortwave band. The "dial" is on the touch-screen display
...

Welcome to program 114 of VOA Radiogram from the Voice of
America.

One hundred years ago, a new brand of kitchenware named Pyrex
entered the American market, firmly imprinting its name into the
psyche of consumers. It is still being manufactured while the
early models are now collectors' items.

The characteristic sound of putting the lid on a Pyrex dish is
recognizable to many, as it can be heard in kitchens all over the
world.

Heat resistant glass was invented in Germany at the end of the
19th century, but was used mostly in lanterns and in jars to hold
telegraph and telephone batteries.

Its usefulness as cookware was discovered by accident. A
scientist from the Corning Glass Works manufacturing company in
New York brought his wife a sawed-off battery jar made of the
so-called borosilicate glass, resistant to heat and mechanical
abuse.

"She proceeded to bake a cake, a sponge cake, in this battery
jar. And she discovered that the baking was much more efficient,
and much more even than baking in ceramic or metal was," said
Kelley Elliott, of the Corning Museum of Glass.

Elliott added that when it finally appeared on the market in
1915, Pyrex dishware became an instant hit.

At first, dishes were made of clear glass, but the company soon
started offering it in colors popular at that time.

"It's kind of crazy! But the popular patterns are the pinks, the
turquoises," said Halasz. "The friendship pattern is a pattern
that came out in the 70s. That's highly collectible."

Because it is not affected by temperature changes, borosilicate
glass is also being used for astronomical instruments, such as
the 5.1 meter telescope mirror at Mount Palomar Observatory.

As for Pyrex dishes, they are still being manufactured by
companies that bought the rights to this recognizable brand name.

Image from the video version of this VOA News story ...

ALEXANDRIA, VIRGINIA - Some people don't feel the need to have
the trappings of today's technology. That includes Dennis Webb
who, 40 years ago, opened a shop in Alexandria, Virginia, that
combined his boyhood hobbies of growing plants and reading comic
books. He added trading cards and an assortment of other stuff
to create his "Exotic Planterium and Card and Comic
Collectorama."

Sixty-eight-year-old Webb, a quiet soft-spoken man with friendly
smile, looks a bit as worn as his store. "I'm just trying to
have a good, steady income," he said, "do things that I enjoy,
working with people who like some of the same things I like."

The Collectorama looks like a remnant of the past with its dim
lighting, and handwritten signs announcing "Comics" and "Exotic
Plants" on the windows. The display of exotic plants includes
Venus Fly Traps, carniverous plants that eat insects. The dusty
interior is packed with an eclectic mix of items – records, old
books and magazines, and action figures in original packaging
from the Star Trek science fiction TV and movie series. There
are even newspaper clippings of famous peoples' obituaries for
sale.

Nothing is new. A refrigerator from the 1940s, where Webb keeps
his lunch, sits in the center of the room, surrounded by the
collectables. Webb thinks his landline phone may go back a
couple of decades or more. He doesn't own a cell phone. "I
don't like the idea of walking around with a cell phone and being
on call all the time," he explained.

Webb has no interest in selling his products over the Internet,
even though he could make more money. Nothing here costs more
than $100. "I like people coming to the store to buy things, to
talk with them," he said. "Seems to me people would get more out
of it if they came in, looked around, and maybe they'd find other
things of interest to them."

Webb's biggest collection is several thousand comic books. There
are rare editions on the wall, some going back to the 1940's. "I
get a lot of my comics from people who come by," Webb explained.
"Maybe they're moving, they're not interested in collecting them,
maybe they inherited them and they didn't really want them."

Marty Belkowitz wanders into the store out of curiosity, and is
drawn to the comic books. "He's got an enormous collection,"
said Belkowitz, "and a lot of things I remember from my
childhood, which is always fun."

Most of the comic books are jammed into old cardboard boxes,
carefully sorted by era and type. "And they're all in good
order," Webb said, "so if people tell me they want a Superman, I
can take them right to that section."

David Kingwood comes in to buy some Superman comic books he
remembers from his childhood. Superman "has around for so long,
since the late 1930's," the 49-year-old comic book collector
said, "and people have grown up with him."

Webb writes up the sales slip by hand. He doesn't have a
computer, because, he says, using it takes too much of his time.

The store also boasts an extensive collection of trading cards,
which feature movie stars, explorers, inventors and sports
figures. A unique card with a famous American football
(gridiron) player has a background with real gold leaf.

Twelve-year-old Jayden Tumiwa lives nearby, and buys sports cards
to trade with friends. "The older, the more valuable they are,"
said Tumiwa, "and he's got some pretty good prices, so I come in
here often."

The Collectorama seems out of place now in a neighborhood that
has become more upscale in recent years. But Webb says he is
content with the aging store and wouldn't change a thing.

Image from the video version of this VOA News story ...


Because of last week's transmission of slow scan television
(SSTV) in the PD180 mode, many of you have SSTV decoding software
downloaded, installed, and (we hope) working.

We will therefore transmit another SSTV image. This week the SSTV
mode will be Scottie DX, probably the most robust mode for long
distance shortwave.

The photo: Special Italian airforce unit "Frecce Tricolori"
(Tri-color Arrows) spread smoke with the colors of the Italian
flag over the military parade at Via dei Fori Imperiali avenue in
central Rome to mark the Republic Day.

After this 4 minute, 31 second Scottie DX transmission, MFSK32
will resume. 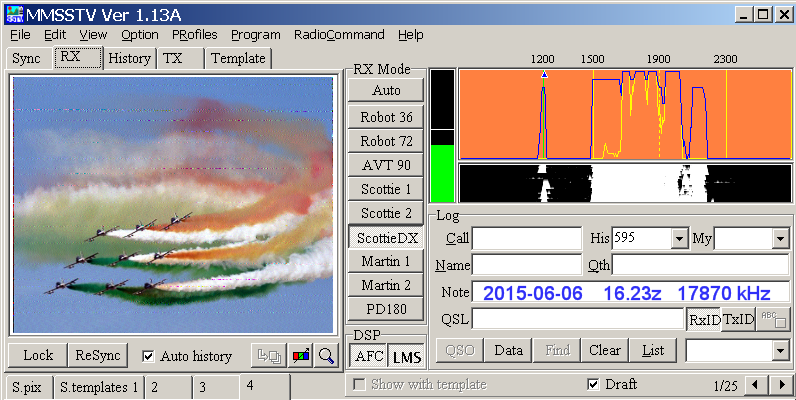 The preceding Scottie DX image was 320 x 256 pixels and required
271 seconds to transmit. The following MFSK32 image of the same
photo will occupy nearly the same amount of time, 275 seconds,
and will be 333 x 266 pixels ...