This is a computer program for Amateur Radio transmission and reception using a computer and radio transceiver. The program equips your computer with a one sentence at a time chat-mode for operation on the HF
bands. You use it in the same way as you would Skype™ or cell-phone TXTing. This facilitates rapid-fire QSOs and especially makes nets easier.

As usual, sound card techniques are used to generate transmissions using tones at audio frequency, and to receive and decode the incoming signals, also at audio frequency. An SSB transceiver translates these
signals to and from the HF Amateur Bands. The EXChat mode is a development of DominoEX, and is completely compatible with other DominoEX versions. In fact operators without EXChat, but who have another version of
DominoEX, can take part in a QSO, if in a slightly clumsy manner. What is different about EXChat is that it operates in Sentence Mode.

To read more about DominoEX in general, visit the main DominoEX web page.

The speeds quoted for EXChat are approximate for typical text in English. For speed measured in Characters per Second (CPS), divide the above values by 10. Speed varies slightly with content. Speeds and parameters
have been chosen following extensive on-air and simulator testing.


In this context, 'DX' means different things on different bands. For example, on 80m DX means anywhere outside groundwave range; on 20m double-hop or long path; on LF, MF and VHF, any weak signal application. There's
a general principle for EXChat: it's a bit like driving a car - when the going gets tough, change down a gear! Here are some suggestions:

8 baud for weak signal MF and transition periods (sunrise/sunset) on 80 and 40 metres.
11 baud, for general 80 (night) and 40 metre (day) use.
Faster 16 baud for daytime 40 metre use and single-hop 20 metre QSOs.
High speed 22 baud for local ground-wave use, including VHF and UHF.

Sometimes (especially on higher bands) faster speeds give better copy. In a net situation, go with the speed which works for everyone.

High tolerance of receiver drift and tuning offset.
High tolerance of multi-path timing (e.g. NVIS on 80 metres) - best at 8 baud.
It is more sensitive and much less error-prone that PSK31 or RTTY. It is so robust that FEC is not required.
Very fast receiver sync. Text is printed very soon after tuning is achieved (there is minimum latency, under one second).
Not only is the tuning display clear and sharp, even when signals are weak, but you need only centre the signal within 100Hz or so.
High typing speed - with a Varicoded character set and no FEC, a data rate of 70 WPM is achieved at the default symbol rate of only 10.76 baud.
de PA0ETE k

Welcome to program 117 of VOA Radiogram from the Voice of America.

Shell Shock: Triassic Reptile Was 'Grandfather' of All Turtles

WASHINGTON - It looked like an odd lizard with a bulky body and
only the skeletal precursor of a shell, but scientists say 240
million-year-old fossils unearthed in a quarry in southern
Germany represent the grandfather of all turtles.

The scientists on Wednesday announced the discovery of the
oldest-known turtle, a 20-centimeter (8-inch) Triassic Period
reptile combining traits of its lizard-like ancestors with a set
of emerging turtle-like features.

They named it Pappochelys, meaning "grandfather turtle," owing to
its position at the base of the turtle family tree.

"Pappochelys indeed forms a missing link for two reasons. It is
far older than all so far known turtles. And its anatomy is more
primitive in many features, showing the ancestral condition of
various body regions," said paleontologist Rainer Schoch of
Germany's State Museum of Natural History Stuttgart.

It is 20 million years older than the previous earliest-known
turtle, Odontochelys from China. While Odontochelys boasted a
rudimentary shell on its back, Pappochelys bore only the
beginnings of this characteristic turtle trait that evolved in
many steps over tens of millions of years.

"The belly armor is composed of thick, rib-like bones that are
beginning to fuse to each other in many places," said
paleontologist Hans-Dieter Sues of the Smithsonian Institution's
National Museum of Natural History in Washington, calling this
"an important stage in the evolution of the turtle shell."

Pappochelys, known from 18 fossil skeletons, had a long tail,
broad trunk and, rather than a beak as in later turtles, a
lizard-like skull with numerous peg-like teeth suitable for
eating insects and small lizards. It resided alongside a
freshwater lake and may have used its tail for swimming and legs
for steering in the water. Schoch said Pappochelys, as a
transitional creature between lizard-like ancestors and later
turtles, provides a much clearer picture of turtle evolution.

"Transitional creatures are the most important contribution that
paleontology can make to the study of evolution. They are often
unexpected and show surprising features," Schoch said.

"They show how complicated structures like the skull or turtle
shell formed step by step, and also give evidence on the sequence
of evolutionary steps."

The research appears in the journal Nature.


Image: An artist's reconstruction shows the stem-turtle
Pappochelys in this image released to Reuters, June 23, 2015 ... 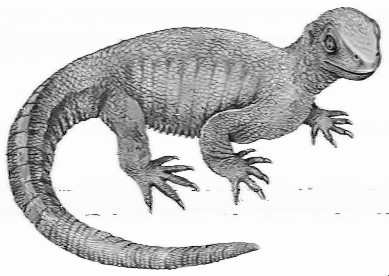 WASHINGTON - A new report by the cloud-services firm Akamai says
the global World Wide Web is getting significantly faster, but
also warns that the explosive growth in the number of connected
devices may exhaust the limited remaining space currently
available on the Internet.

The report, "State of the Internet," is a quarterly snapshot of
the Internet's performance and spread around the world. It tracks
access to the web, Internet and mobile data speeds, and the
overall stability of the web.

"The changes this quarter were overwhelmingly positive," said
David Belson, senior director of industry and data intelligence
at Akamai and editor of the report. "I always say that the
year-to-year changes are more illustrative, but given that this
report tracks the same trends we've been seeing for a while, I
think that's a very positive sign."

The report concludes that Internet connectivity continues to grow
in every part of the world, with total users approaching 3.2
billion. Presently there are approximately two connected devices
for every person on the planet; the report predicts that number
will grow to three devices per capita by 2019.

The United States still leads the world in the number of unique
Internet addresses, followed by China and Brazil, two countries
that are seeing rapid growth.

According to the report, average global connection speeds rose by
10 percent over last year, rising to approximately 5 megabits per
second. However, less than 5 percent of the world's population
has access to Internet speeds of 25 megabits or higher.

"This continues to reinforce the trends we've been seeing,"
Belson said. "There's more and more Internet usage, and
connectivity speeds are getting faster."

South Korea topped the list of average connection speeds at 23.6
megabits with one in five residents having access to broadband
speed — a new global high. Ireland, Hong Kong, Sweden and the
Netherlands rounded out the top five nations.

Singapore charted the most dramatic increase in peak connection
speeds, while connection speeds increased most dramatically in
Kuwait and Mongolia, at 126 and 72 percent respectively.

The report also charted access speeds for mobile devices and
found that mobile data traffic grew by 12 percent over the last
quarter. Britain had the fastest average connection speed at 20.4
megabits — a 28 percent increase from the previous quarter — with
Denmark coming in second place at 10 megabits.

The report says the unbridled growth is contributing to a looming
problem: The Internet is running out of the addresses needed to
connect devices to the web.

Much of the web uses Internet Protocol version 4, or IPv4, to
govern data traffic. IPv4 has a total of 4.29 billion unique
addresses for computers, tablets and other digital devices to
connect and route traffic.

But with billions of addresses already used up, and the potential
of the so-called "Internet of Things" to rapidly claim what
addresses remain, IPv4 will run out of room in the near future,
analysts say.

A new version of the web, known as IPv6, has been available for
more than a decade and would vastly increase the number of
potential addresses for devices connecting to the web. The
problem, Belson said, is that without a definitive threat
looming, service providers have been lax in updating their
systems.

If the RSID does not change the mode to Olivia 32-2000, 20
seconds will be provided after the RSID for a manual mode change
...

Russia's state media watchdog has blocked the website of a
consumer rights group that has cautioned Russians against
traveling to Crimea.

The media regulator, Roskomnadzor, said on June 22 that it had
acted on a request from the Prosecutor-General's Office, which
has launched a probe against the Society for Protection of
Consumer Rights.

The group, which is on the Justice Ministry's list of foreign
agents, published a notice last week warning Russians that after
visiting the peninsula without permission from Ukrainian
authorities they could face criminal punishment in Ukraine.

It argued that Russia's annexation of Crimea in March 2014
violated both international law and treaties Russia signed with
Ukraine.

Based on reporting by AP and TASS

Greetings to radio amateurs in North America participating in
this weekend's Field Day event. From the American Radio Relay
League:

"ARRL Field Day is the most popular on-the-air event held
annually in the US and Canada. On the fourth weekend of June,
more than 35,000 radio amateurs gather with their clubs, groups
or simply with friends to operate from remote locations."

Field days stations can earn extra points by copying the bulletins
transmitted by the ARRL station W1AW in Connecticut and by K6KPH
in California. These bulletins are in phone (SSB), CW, and
digital modes.

Here is the schedule:
http://www.arrl.org/news/w1aw-announces-field-day-bulletin-schedule


This photo from the Pelican Bay Amateur Radio Club in Brookings,
Oregon, shows the preparations typical before Field Day
operations begin. An antenna mast, with guy wires already
attached, is being raised ... 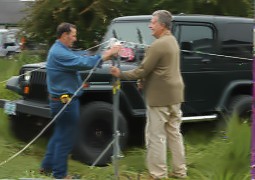