Thanks to a tip from the facebook.com/TheMightyKbc, I'm now a
frequent viewer of the Harlingen webcam: www.webcam-harlingen.nl
From its Zuiderpier webcam, here's an early morning view of the
bright red KBC radio ship, with a cruise boat in the foreground

This should be below normal audio.
de PA0ETE k


Welcome to program 118 of VOA Radiogram from the Voice of
America.

Here is the lineup for today's program, all in MFSK32 except
where indicated ...

CHRISTCHURCH - Just over four years ago, New Zealand suffered one
of its most catastrophic earthquakes. In February 2011, a
magnitude 6.3 tremor shook the city of Christchurch. More than
180 people died. In the years since, authorities have made great
efforts to make the city resistant to future tremors – and their
work is now slowly taking shape.

More than 1,000 buildings have been demolished in the center of
Christchurch since the earthquake struck in February 2011, and
the major reconstruction phase is well underway.

John Ombler, acting head of the government-appointed agency
overseeing the rebirth of this famous city, said strict building
codes will ensure that Christchurch will have some of the safest
buildings in the world.

"At ground level there are foundations that can move with an
earthquake. There is one large office block here that is on 19
very large ball bearings, so that in case of an earthquake it can
move half-a-meter in any direction depending on the severity of
the earthquake and then just gradually settle back into its right
place so that buildings can wobble around a little bit. They are
designed to do so. There is a huge amount of work goes on, huge
excavation, huge expenditure into the foundations long before it
comes out of the ground. So foundation design [is] absolutely
critical," said Ombler.

The task of rebuilding the city will cost more than $27 billion.
There have been delays because of more seismic activity, the
processing of insurance payouts and red tape.

But Deon Swiggs, the director of Rebuild Christchurch, a
community campaign group, said temporary measures, such as a
shopping center made up of shipping containers, have helped the
city to cope.

"Right now we are in the Re: Start Mall, which is a container pop
up that was set up after the earthquakes. We lost a lot of our
central city business district, all our shopping businesses and
buildings. By November next year the development along Cashel St
that we are looking at now that should be built. That is going
to be retail [and] office space. There is about 1,200 office
people from the government that have already signed leases to go
into these buildings," sasid Swiggs.

A key part of the Christchurch recovery has been the influx of
foreign labor. Immigration rules have been eased to allow
migrants to play a crucial part in accelerating the rebuilding
effort. Up to 25,000 foreign workers have been involved. The
largest group is from the Philippines, followed by the United
Kingdom.

"Filipinos, Irish, people from the UK. We have brought a lot of
them in. They'll add to the mix and the vibrancy of the city. I
have always thought that despite the earthquakes were one of the
worst things that happened and could happen, out of it we will
have a stronger, more vibrant, more resilient second city and
capital of the South Island than we would have had otherwise, and
these people will contribute to that," said Joyce.

Tom Hooper, the chief executive of the Canterbury Development
Corporation, sees a bright future ahead.

Building work will continue for more than a decade. Authorities
say the goal is to create a city that is safe from future seismic
shocks.


Image: Construction work can be seen across the Christchurch
skyline, June 12, 2015. (Phil Mercer for VOA News) ... 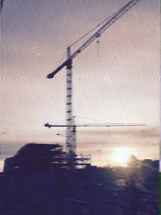 CAPE CANAVERAL, FLORIDA - The comet being studied by Europe's
Rosetta spacecraft has massive sinkholes in its surface that are
nearly wide enough to swallow Egypt's Great Pyramid of Giza,
research published Wednesday shows.

Scientists suspect the pits formed when material on the comet's
surface collapsed, similar to sinkholes on Earth, a study
published in the journal Nature said.

The cavities on comet 67P/Churyumov-Gerasimenko, which Rosetta
has been orbiting since August, are enormous, stretching some 656
feet (200 meters) in diameter and 590 feet (180 meters) in depth.

The discovery is expected to help scientists piece together a
better understanding of how comets formed and evolved.

Comets like 67P are believed to be rubble piles of boulder-sized
mini-comets made of rock, organics and ices.

Gravity pins them together gently, with lots of open spaces in
what eventually forms the comet's body.

Why the pits begin collapsing is not yet known, but could be
related to the heating a comet experiences as it travels closer
to the sun. Several of 67P's sinkholes, for examples, are pumping
out jets of dust.

"We see jets arising from the fractured areas of the walls inside
the pits. These fractures mean that volatiles trapped under the
surface can be warmed more easily and subsequently escape into
space," lead researcher Jean-Baptiste Vincent, with the Max
Planck Institute for Solar System Research, said in a statement.

Similar circular shapes have been found on the surface of other
comets, but those pits were filled in by new material that had
collected over the eons. Scientists suspect they are seeing
freshly formed pits on 67P, which in August will reach its
closest point to the sun in its 6.5-year orbit.

None of the 18 pits found on the surface of 67P are located near
where Europe's Philae lander settled in November.

Scientists are attempting to re-establish a steady communications
link between the newly revived Philae and Rosetta so the lander
can resume science operations.

The European Space Agency last week extended Rosetta's mission,
which was due to end in December, to September 2016.


Image: Pits on the surface of Comet 67P/Churyumov Gerasimenko's
northern hemisphere are pictured in this handout photo ... 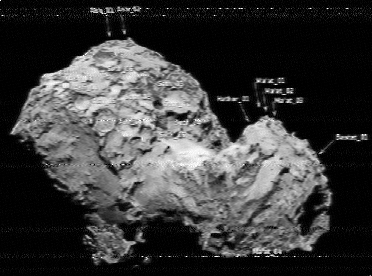 Smart phones, essentially pocket-sized computers, we already
have. Flying drones with cameras are available to everybody.
Robots and self-driving cars are just around the corner. Now, two
groups of inventors say very soon we will be able to try flying
platforms and flying bikes.

Being able to fly around as simply as riding a bicycle has been a
long-standing dream of many inventors. But the safety and
stability of such vehicles was always a huge problem.

As relevant technologies, such as quadcopters and high-capacity
batteries, have developed within the past decade, the dream of
personal flying vehicles has moved closer to reality.

The British firm Malloy Aeronautics has demonstrated a prototype
of its hoverbike that it says will be a truly personal flying
platform.

"It's inexpensive, it can carry a decent load, it can get in and
out of very small spaces very quickly, and it can be moved across
continents very quickly because it can be folded and packed,"
said Malloy Aeronautics' marketing sales director, Grant
Stapleton.

He said with safety as the primary concern, designers came up
with an innovative idea of overlapping rotors, whose, so-called
'adducted' propellers are turning in enclosed spaces.

"With adducted rotors you immediately not only protect people and
property if you were to bump into them, but if you ever were to
bump into somebody or property, it's going to bring the aircraft
out of the air," said Stapleton.

The company is doing extensive testing with a one-third scale
model, and also with a full scale tethered prototype.

Inventors say their Hoverbike will most likely be used first by
the military, police and rescue squads.

Meanwhile, Martin Aircraft Company from New Zealand already is
testing a full-scale prototype of its personal flying device
called Jetpack that can fly for more than 30 minutes, up to 1,000
meters high, and reach speed of 74 kilometers per hour.

Martin CEO, Peter Coker, said, "This is built around safety from
the start. Reliability is the most important element of it. We
have safety built into the actual structure itself. Very similar
to a Formula One racing car."

"It opens at very low altitude and actually saves both the
aircraft and the pilot in an emergency," he said.


Image: Screen capture from the video version of this VOA News
story ...

Twenty seconds will be provided after the RSID in case the RSID
does not change your mode to Olivia 32-2000 ...

DUBAI, UAE - Dubai said it would construct a small office
building using a 3-D printer for the first time, in a drive to
develop technology that would cut costs and save time as the city
grows.

3-D printing, which uses a printer to make three-dimensional
objects from a digital design, is taking off in manufacturing
industries around the world but has so far been used little in
construction.

It would then be assembled on site within a few weeks. Interior
furniture and structural components would also be built through
3-D printing with reinforced concrete, gypsum reinforced with
glass fiber, and plastic.

The project is a tie-up between Dubai and Winsun, a Chinese
company that has been pioneering the use of 3-D printers to build
houses. Gergawi cited studies estimating the technique could cut
building time by 50-70 percent and labor costs by 50-80 percent.