Welcome to program 119 of VOA Radiogram from the Voice of
America.

Here is the lineup for today's program, all in MFSK32 except
where noted ...

BOULDER, COLORADO - "We are stardust" is more than a lyric in a
hit 1970's song. It's actually true. Our solar system began as
flecks of star-created gas and dust that drew together to form
our sun, the planets ... and us. And there was plenty of dust
left over.

So, as NASA's New Horizons spacecraft prepares to begin the
first-ever fly-by of Pluto on July 14, dust is one of the data
points. And the millions of tiny particles are being counted by a
device designed, created and monitored by students at the
University of Colorado's Laboratory for Atmospheric and Space
Physics.

David James, a research assistant at the lab, recalls that work
on the Student Dust Counter began more than a decade ago. He was
a graduate student in physics when a friend told him about the
project and he signed up.

"She said, 'I'm working on this project that's really neat. It
has a lot of real world applications and you know, it's
eventually going to be launched into space,'" he recalled.

Tiffany Finley was also a graduate student when she joined the
team in 2002.

"This opportunity came up and I said, ‘What? You're going to
Pluto? I would love to be part of that,'" she said.

Finley became manager of the project to build a dust counter for
the New Horizons mission, a task she said would normally be
assigned to professionals.

"As a student project, it's one of the first where students
actually got to build the hardware on the mission," she said.

University of Colorado Physics Professor Mihaly Horanyi has been
the faculty advisor for the Student Dust Counter project since
the beginning. He notes that, as project manager, Tiffany "was so
worried about timely delivery, that she was the first to show up,
beating all other professional instruments. The Student Dust
Counter was the very first that was bolted on New Horizons."

Horanyi says that student labor made building the device
affordable, while working on the project has so far helped nearly
three dozen students do more than wish upon a star.

In 2006, the briefcase-sized Student Dust Counter launched with
the New Horizons spacecraft. During the 25-billion kilometer
journey to Pluto, six on-board devices mostly stayed in
hibernation. Now they're awake and beaming back color photographs
and analysis of the dwarf planet's chemistry. However, the
Student Dust Counter has been measuring and counting dust hits
ever since launch. ...

After a five-month long flyby of Pluto, most of the instruments
on New Horizons will shut down. But as the spacecraft continues
through the Kuiper Belt to the edge of our solar system, the
Student Dust Counter will keep counting. 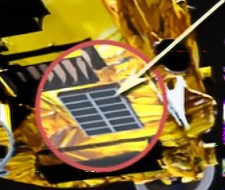 Kim's note: If the Student Dust Counter were to fly inside my
house, it would probably malfunction due to overwork.

He was known as the Bear Man of Dushanbe.

An old man with a bushy white beard and his bear, Maria, were a
regular fixture in [Dushanbe, capital of Tajikistan] for
over 20 years, strolling along streets, posing for photos, even
riding public transport.

Now Tajik social media users want to raise money to build a
statue of "bear man" Talabshoh Sheikhov and Maria, both of whom
died in 2013.

"I remember them. During my student years, I would go to the city
center just to see them. It's a great idea to put up a statue of
them because we want our children also to know about those two
unusual and special Dushanbe residents," wrote Facebook user
Khosiyat Nazarali.

"Yes, they were the calling card of Dushanbe. I support the
fundraising idea!" wrote Alexey Loginovsky.

Hundreds of others offered their support, too.

In interviews with Tajik media over the years, Sheikhov said he
first saw Maria -- then a six-week-old cub -- at a neighbor's
house in the early 1990s.

The neighbor wanted to sell the cub, whose mother was killed by
hunters. Sheikhov traded a goat for the cub and took her home.

He named her Maria, after the heroine of a Mexican soap opera
that was wildly popular on a Russian television channel at the
time.

Maria was raised with bottle milk and food Sheikhov's "other 13
children" shared in their modest house in Yalash, a village in
Tajikistan's eastern Jirgatol district.

But Maria's ever-growing appetite soon became increasingly
unaffordable for her master, who affectionately called the bear
"my daughter."

In one interview, Sheikhov said the bear would eat 10-12
kilograms of food a day.

Sheikhov left the village and his family behind and settled with
Maria in Dushanbe, where he put the bear to work to help foot the
bill.

Residents say she would entertain children with her forward rolls
and give them rides on her back under the watchful eyes of her
master, who kept Maria on a leash.

The duo become well-known in Dushanbe, where they could be seen
riding a bus, sharing a meal, or carefully crossing a busy
street.

Sheikhov once told media that he was even invited to entertain
President Emomali Rahmon at a party celebrating the traditional
Tajik new year, Navruz. He said the president paid $200.

Not everyone was charmed, however: where some people saw fun and
frolic, others saw animal cruelty.

"Poor animal. I remember how he would pull her on a leash,"
recalled Facebook user Lesya Marenkova.

Sheikhov was in his 80s when he died. Maria died two months
later.

"We definitely need to put a statue of them," Tahmina Safarova
wrote on Facebook. "It's important to remember those who gave so
much happiness and fun to people." 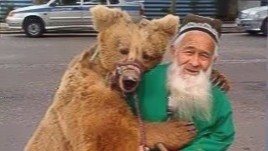 WASHINGTON, D.C. - The Voice of America, in partnership with
AudioNow Digital, launched an audio-only app that will allow
users to listen to VOA programming over data or cellular voice
connections. That option is especially valuable for VOA audiences
in emerging markets where streaming audio is not available or
cost prohibitive.

VOA Mobile Streamer, which is available on Apple and Android
platforms, will provide broadcast audio programming in 33
languages. In addition to on-demand programming, the app also
offers live 24/7 radio streams in more than a dozen languages.

"We are very pleased to add this app to our suite of mobile
products," said Kelu Chao, Acting Director of the Voice of
America. "VOA Mobile Streamer allows us to better serve and
connect with audiences in low-bandwidth countries and provide
them with high-quality news and information they can't get
elsewhere. By giving our audience access to our radio broadcasts
via voice, VOA is now available on even the simplest of mobile
phones."

"We worked with VOA and AudioNow to make a very non-traditional
news app experience," added Adam Martin, Acting Director of BBG's
Office of Digital and Design Innovation. "Mobile Streamer's
unique and refreshing design is particularly attractive to
younger audiences, and its accessibility in low-bandwidth areas
is crucial to reaching key audiences."

The Voice of America reaches a global weekly audience of more
than 172 million people in nearly 50 languages. VOA programs are
delivered on satellite, cable, shortwave, FM, medium wave,
streaming audio and video and more than 2,350 media outlets
worldwide. It is funded by the U.S. Congress through the
Broadcasting Board of Governors.

The BBG's Office of Digital & Design Innovation (ODDI) builds the
solutions to the biggest digital challenges faced by U.S.
international media. ODDI works with technology to improve US
international news media by creating new ways for journalists to
reach their critical audiences and understand the audience from a
technology standpoint. The ODDI Mobile team's previous apps have
been internationally-recognized for their innovation by being
selected as finalists for the 2014 GSMA Global Mobile Awards
"Best Mobile Publishing Product or Service" and the 2014 Appy
Award for "Best Multicultural App." 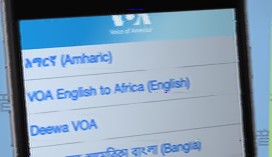 
On VOA Radiogram, we occasionally experiment with non-Latin
alphabets.

Here is an excerpt of a VOA Korean news story about the South
China Sea ...

Here are some pics of  OE3ODW