One of the US-built vehicles at the Americana International show
in Loughborough, England, was this Forest River *recreational*
vehicle -- travel trailer -- caravan. In the early 1970s, I
worked in a factory in Indiana building RVs similar to this ...


Welcome to VOA Radiogram from the Voice of America.

BERLIN - Scientists say the Philae spacecraft that landed on a
comet last year may have shifted its position, making it harder
to communicate with the probe.

The European Space Agency says it hasn't received data from the
lander since July 9. Philae's project manager, Stephan Ulamec,
said Monday the pattern of sunlight on the lander's solar panels
appears to have changed, possibly due to a slight shift in
position triggered by gas coming out of the comet.

One of Philae's two transmission units also appears to be faulty.

Scientists plan to send further commands to the lander and hope
it responds again, as has happened before.

The mission will now focus on the spacecraft Rosetta, which is
following comet 67P/Churyumov-Gerasimenko that Philae is on as it
goes around the sun.

must be, I think:


Image: An artist's rendering of the Philae probe on Comet
67p/Churyumov-Gerasimenko.

WASHINGTON - Most of us hardly ever think about the Earth's
magnetic field. We might be aware that it helps guide birds as
they migrate and ensures that our compasses point north, but not
realize that it is one of the crucial components that make life
on Earth possible. Yet, the processes in the Earth's core that
create the magnetic field are poorly understood.

At a lab of University of Maryland, scientists are trying to
replicate the conditions that reign 3,000 kilometers below our
feet.

Deep inside our planet, a 3,400 kilometer-wide sphere of molten
iron and nickel, with a smaller solid iron ball at its center,
creates the electric currents responsible for Earth's magnetic
field.

The most immediate benefit is its role in navigation.

"It's an important part of what makes the Earth a habitable
planet because it shields us from a lot of the worst radiation
from the sun," he said.

Evidence shows that the Earth's magnetic field is not stationary.
It wanders around and sometimes even ventures far away.

"We do know the Earth's magnetic field has reversed north-south
hundreds of times in Earth's history," said Lathrop. "Of course,
the spin of the Earth stays the same, but where the magnetic pole
is - moves and has actually reversed."

In their laboratory, funded by the National Science Foundation,
Lathrop and his team are trying to find out how and why that
happens.

Spinning a ball of molten iron being somewhat impractical,
researchers built a suitable substitute: a 3-meter wide spinning
steel ball filled with 12.5 tons of sodium, a soft metal that
melts at just under 100 degrees Celsius.

A 1-meter-wide inner non-magnetic steel sphere substitutes for
the solid core. Both can be rotated independently.

Spinning them slowly has not created the so-called dynamo effect,
thought to be responsible for creating magnetic fields.

Will these experiments prepare us for the possible reversal of
the Earth's magnetic field? Lathrop says it is difficult to
predict changes that happen over thousands of years.

Lathrop notes that the intensity of our planet's magnetic field
has dropped about 10 percent in the last 170 years, so the
reversal process may have already started.

Fortunately for us, the change is too slow to affect our regular
lives.

Image: Screen capture from the video verson of this VOA News
story ... 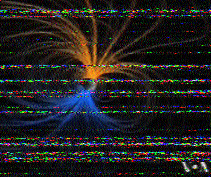 Space scientists closely observe this activity, because it may
have adverse effects on communications, navigation and even power
grids. But the diminishing intensity of the last two solar
cycles leaves them puzzled.

When gigantic electromagnetic storms occur on the sun, we see
them eight minutes later, which is how long it takes the light to
reach Earth.

It takes the first charged particles ejected by the storms 20 to
30 minutes to arrive. They are dangerous to humans, so if the
storm is intense, astronauts aboard the International Space
Station are advised to move into specially protected areas.

After a day or two comes the biggest part of the storm, the
coronal mass ejection.

"That is billions of tons of solar material that's blown away
from the sun," said Alex Young of NASA's Heliophysics Science
Division. "It's traveling millions of kilometers an hour, but
that is relatively slow."

Several government agencies, as well as the U.S. Air Force,
observe the space weather, as they call it, 24 hours a day. NASA
does it in order to protect its astronauts and the sensitive
electronics of its spacecraft, but also because many questions
about our star still need to be answered. One of them is why the
sunspots follow a roughly 11-year cycle, from low to high
activity.

"Also, sometimes the intensity is higher and sometimes it is
lower," Young said. "The current solar cycle that we are in is
much lower than the previous one."

Another big question: Why is the sun's atmosphere hotter than its
surface?

"Particles are much farther and farther apart," Young said, "but
the temperature — that is, how fast these particles are moving —
increases very quickly, going from tens of thousands of degrees
up to millions of degrees."

Several satellites are constantly observing the sun, as well as
the environment between the sun and Earth, sending pictures and
other data. Young said we have been looking at the sun in
incredible detail for only 30 to 40 years, and because our star
is about 4 billion years old, that is only a tiny fraction of its
long life.


Image: Screen capture from the video verson of this VOA News
story ...


Study: Life on Earth Could Have Begun on Dry Land

New research reveals puddles that dry in the sun and re-form with
the next rain mimic the environment in which life on our planet
could have formed.

Scientists at the Georgia Institute of Technology say that on the
early Earth amino and hydroxy acids combined and were then
subjected to cycles of wet and dry conditions. Over time, that
chemical reaction formed polypeptides - the building blocks of
life.

The work supports the theory that life could have begun on dry
land, where cool moist nights were followed by heat and
evaporation under the sun. Reporting in the German journal
Applied Chemistry (Angewandte Chemie), the researchers say they
were able to form complex polypeptides in the lab after just 20
wet-dry cycles.

Center for Chemical Evolution Director Nicholas Hud said his
lab's work offers a more plausible explanation for peptide
formation than previous theories - which involved high
temperatures incompatable with life and the questionable presence
of activating chemicals on the early Earth.

Image: Curtain antenna at the Murrow trasnmitting station, of the
type used on VOA Radiogram frequencies 17870 and 15670 kHz.

[Bovolone is a town and a comune (municipality) in the Province of Verona in the Italian region Veneto, located about 90 kilometres (56 mi) west of Venice and about 25 kilometres (16 mi) southeast of Verona.]