Josh in New York City reports "loud and clear" reception of KBC
on 9925 kHz -- with the city's skyline in the background! ...


Josh in New York City reports "loud and clear" reception of KBC
on 9925 kHz -- with the city's skyline in the background! ...

Welcome to program 124 of VOA Radiogram from the Voice of
America.

WASHINGTON - Scientists have unlocked the genetic secrets of one
of Earth's underwater wonders: the octopus, whose eight
sucker-studded arms bestow an otherworldly appearance and whose
large brain places it among the smartest invertebrates.

Researchers Wednesday unveiled the first complete genome of an
octopus or any species of cephalopod, the class of mollusks also
including squid, cuttlefish and nautiluses.

"They can camouflage themselves with skin that can change its
color and texture in the blink of an eye," she said. "They have
eight prehensile, sucker-lined arms that they can use to grasp,
manipulate and even, strangely enough, taste objects, as well as
complex, cameralike eyes, and large, elaborate brains that allow
them to be active predators with complex behaviors."

The researchers sequenced the genome of the California two-spot
octopus (scientific name Octopus bimaculoides), a relatively
small, gray-brown species with two iridescent blue spots on each
side of its head. It dwells off Southern California's coast.

Its genome was large, nearly the size of the human genome and
much bigger than those of other sequenced invertebrates such as
flies, snails or oysters.

Among its roughly 33,000 genes, some 3,500 are found in no other
type of animal, with many of these octopus-specific genes active
in the brain, suckers, retina and in camouflage ability.

The genome was arranged differently than in other invertebrates
and featured an expansion in a family of genes regulating nerve
cell development that previously was thought to be enlarged only
in vertebrates.

Octopuses are carnivorous, ripping prey with a hard beak, and can
employ venom while hunting. They also can regenerate lost limbs
and squirt dark ink to elude predators.

The cephalopod lineage is ancient, arising more than half a
billion years ago. The first octopuses appeared about 270 million
years ago. Today there are about 300 species.

"We can now explore the molecular mechanisms of the octopus'
unique development and its complex behaviors, and get a better
understanding of the evolutionary trajectory that led to them,"
said University of Chicago neurobiology graduate student Yan
Wang, another of the researchers.

University of California Berkeley genetics professor Daniel
Rokhsar said genome research is underway on other cephalopods,
including the world's largest, the giant squid.

Image: The California two-spot octopus (Octopus bimaculoides)
shows off its blue eyespot and long, flexible arms, which are
covered in suckers ... 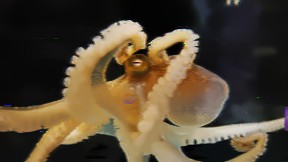 A newly updated analysis of sunspot numbers over the last 400
years suggests solar activity has nothing to do with climate
change, a discovery that eliminates a key argument used by those
who question human caused climate change.

Some of those who suggest that climate change is not
anthropogenic in nature contend that changes in the sun's
activity are responsible for any increase or decrease in global
temperatures.

Scientists have been tracking that solar activity within the
sun's solar cycle by counting sunspots for years.

For the last 160 years scientists have relied on the Wolf Sunspot
Number (WSN) – also called the International sunspot number,
relative sunspot number, or Zürich number – to count the number
of sunspots present on the surface of the sun.

Use of the WSN, since its introduction by Rudolph Wolf in 1856,
has allowed scientists to develop a historical record of solar
activity over time.

But in 1994 scientists began to question whether the WSN was an
accurate method to build a reliable index of historical sunspot
records.

Since telescope technology before modern times wasn't as advanced
as today the scientists thought that perhaps some smaller
sunspots were being missed in the count.

So, a new counting method called the Group Sunspot Number (GSN)
was created by Douglas Hoyt and Ken Schatten in 1994 and
introduced in 1998.

Creators of this new way of counting sunspots said that they were
able to add to amount of available sunspot data since it included
measurements made further back into the sunspot historical record
by Galileo, Thomas Harriot and Christoph Scheiner.

However there are huge discrepancies between the WSN and GSN for
sunspot measurements made before 1885 and around 1945. This has
become a contentious issue among scientists for some time.

One of the links between solar activity and climate change that's
often cited by the non-believers of human caused climate change
is a time period called the Maunder Minimum.

During the Maunder Minimum, which took place between 1645 and
1715, scientists noticed fewer sunspots on the sun's surface.
Winters throughout this time were also unusually harsh.

Some scientists have said that following the end of the Maunder
Minimum, which was also the beginning of the industrial
revolution, a new period of increased solar activity began.

This period of increased solar activity, which is said to have
peaked in the late 20th century with the Modern Grand Maximum,
also happened to coincide with a rise in global temperatures.

While the GSN index reflected this pattern of increased solar
activity the WSN didn't show such a pattern.

A group of scientists led by Frédéric Clette, Director of the
Sunspot Index and Long-term Solar Observations program at the
World Data Center, Ed Cliver from the National Solar Observatory
and Leif Svalgaard of Stanford University have found that the
discrepancies between the WSN and GSN were due to a major
calibration error in the Group Sunspot Number.

So scientists reconciled and recalibrated the sunspot index which
has eliminated the discrepancies between the WSN and GSN.

The resulting new sunspot index called the Sunspot Number Version
2.0, which also includes the older historical data of the GSN,
shows that solar activity has been constant over the past few
centuries without any noteworthy long-term upward trends in solar
activity since 1700.

This means that any rise in global temperatures since the
beginning of the industrial revolution or end of the Maunder
Minimum cannot be attributed to an increase in solar activity.

The scientists presented their new sunspot index at the
International Astronomical Union's 29th General Assembly being
held in Honolulu, Hawaii through August 14th.


From the July science images at the VOA Science World Blog:

NASA's NuSTAR telescope has captured high-energy X-rays coming
from active regions across the sun. This image was created by
combining observations from NuSTAR along with several other
telescopes. 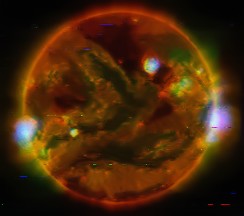 BANGKOK - Asia's rapid economic growth in recent decades has
lifted millions of people out of poverty, but has also carried
steep costs for the region's biodiversity. A gathering of the
International Union for Conservation of Nature (IUCN) in Bangkok
warned this week that unless countries in the region can work
together to better protect the region's shrinking ecosystems,
scores of plants and animals will face extinction.

Asia now accounts for 40 percent of global economic output and
two thirds of global growth. Also some 60 percent of the world's
population live in Asia with urban populations set to reach 3.3
billion by 2050 from 1.9 billion now.

But the region's rapid economic development has taken a toll.

More than 1,400 plants and animals are considered critically
endangered. Some 95 percent of South East Asia's coral reefs lie
at risk. Mangroves, the vital wetlands that once covered tens of
thousands of kilometers of shorelines around Asia, are
disappearing faster here than anywhere else in the world.

IUCN President Zhang Xinsheng said the planet's ecosystems were
no longer able to manage the growing stresses and need renewed
government efforts to stem the losses.

The IUCN in a closing statement urged governments, the private
sector and non-government groups to work much closer in building
solutions for communities and the natural environment.

But the challenge said Yeshey Dorji, Bhutan's Minister for
Agriculture and Forests, was to overcome the short term economic
considerations that usually thwarted long-term conservation
efforts.

IUCN Asia Regional director Aban Marker Kabraji said 2015 marked
a turning point for Asia with an urgent effort to harness the
innovation that fueled the past five decades of Asia's economic
growth and use it to secure the well being of both nature and
humans.

The three-day forum in Bangkok was a key step in the lead up to
the World Conservation Congress of more than 88 state members due
to be held in Hawaii in September 2016.

File photo: A bed of corals off Malaysia's Tioman island in the
South China Sea (Reuters) ...

Exploration of Genome - The Secret of the octopus

The octopus story as headline in the data-Journaline of the  "DEUTSCHLANDFUNK"  via DAB - Digital Broadcast - VHF ch 5c  ~178 MHz. 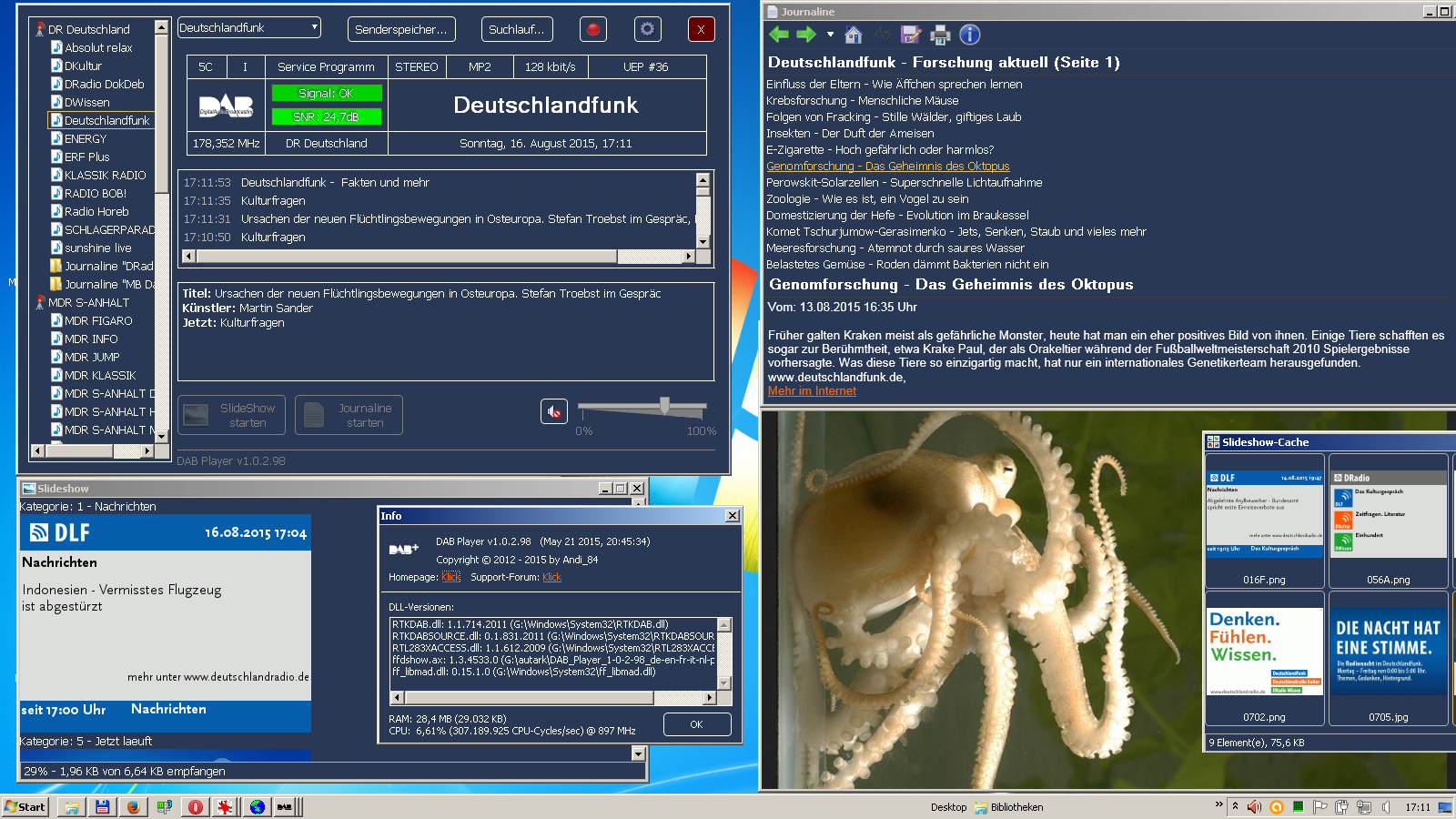