The Mighty KBC as a very vertical image ...


*This assumption is only  true in the case of demodulation in AM or S-AM.


The Mighty KBC as a very vertical image ...


Welcome to program 125 of VOA Radiogram from the Voice of
America.


Thanks to colleagues at the Edward R. Murrow shortwave
transmitting station in North Carolina.

The 'Caliphate' Will Not Be Televised: IS Bans TV, Destroys
Satellite Dishes

The move appears to have followed a decree this month to crack
down on TV watching.

The decree was first announced on August 7 by imams at
IS-controlled mosques in locations including Raqqa, the militant
group’s de facto capital in Syria, activists told RFE/RL.

Raqqa resident Mohammed al-Ali told RFE/RL that he witnessed the
announcement being made in the city's Al Fawwaz mosque during
Friday Prayers earlier in August.

Like those of other witnesses cited in this article, Ali's name
has been changed for security reasons.

"The imam in the Al Fawwaz mosque is known to be a sympathizer
with Daesh," Ali told RFE/RL via WhatsApp this week, using an
Arabic acronym for IS.

"He told people gathered for the Friday Prayer that the news
aired by Al-Jazeera and Al-Arabiya and other channels is
incorrect, baseless, and false and that's why there will be a
decision to forbid people to watch TV."

Civilians would be allowed to watch television only on Fridays,
and then only programs showing the Koran being recited, Ali said.

IS militants have begun to enforce the decree in the town of Al
Shaddadi in Hasaka Province's southern countryside, entering
civilian homes and smashing equipment, local activists say.

"They are entering houses by force to destroy dishes and
satellite receivers," one witness from Al Shaddadi told RFE/RL.
Others corroborated the account.

The move is part of a wider campaign by IS to cement its rule by
cutting civilians off from the outside world while exposing them
to a constant stream of propaganda in its own support.

The militant group -- which seized large parts of northern Syria
in Iraq in an offensive last year and announced the formation of
a caliphate, a state governed in accordance with Islamic law --
has installed huge TV screens in Raqqa's main squares on which
the group airs its propaganda videos.

The militants also spread propaganda via a "Dawa convoy" -- two
huge vehicles that are used as screens, Abu Nasser said.

"The most dangerous thing here is that most of the viewers are
children," commented Abu Nasser.

IS is cracking down on TV watching because the extremist group --
whose members have carried out numerous atrocities and rights
abuses over the past year -- fears civilians will see foreign
news programs denouncing it or showing it in a negative light.

"Daesh considers TV a threat to its own existence," said Hamoud
al-Mousa, the founder of the Raqqa Is Being Slaughtered Silently
campaign.

IS wants civilians to consume TV entertainment outside the home
and only in its specially created "media points," Mousa added,
referring to the outdoor booths where IS shows propaganda videos,
including to young people.

At the "media points," civilians are able to watch videos showing
"how Daesh kills men, women, and children. This is the only
available 'news'," the activist told RFE/RL from Turkey where he
fled for his own safety.

IS is particularly concerned about controlling access to TV
programs aimed at children, Mousa believes.

"Children's programs are dangerous for Daesh because children are
normally used by the group to accomplish its goals," he said.
"That’s why a child should only listen to them and to what they
say."

Mousa, whose father Mohamed was detained by IS for 77 days,
tortured, and beheaded in Raqqa in mid-June because of his son's
activist work, said that IS's Raqqa was reminiscent of
Afghanistan under the Taliban, which closed cinemas and banned
people from watching TV.

IS has carried out other measures to prevent civilians from
interacting with the outside world. In July, the extremist group
banned people in Raqqa from accessing the Internet in private
homes, allowing WiFi connections only in IS-controlled public
cafes.

The militant group has also cracked down on social-media use.

What reportedly began as an effort by the Iraqi government to
prevent cheating on national school exams has grown into an
unexplained series of periodic, regular cuts to Internet access
across that nation.

Beginning on June 27 at 5 a.m. local time, access to the Internet
across Iraq was sudden and drastically reduced, effectively
shutting down Iraq’s Internet.

As detailed by Dyn, an Internet performance company, the service
cut lasted exactly three hours, and full access was restored
immediately at 8 a.m.

The Egyptian news service El Hadas reported at the time that the
service interruption corresponded with the beginning of annual
placement tests for sixth-graders known as the "sixth ministerial
preparatory exams."

The exams largely determine which students will go on to continue
their education, and which will not.

Given those high stakes, the Iraqi Ministry of Communications
reportedly severed the Internet to keep students’ friends and
relatives from helping them cheat on the tests.

However, while the exams are long since over, the Internet
interruptions have continued, following the same pattern of
precise, three-hour cuts beginning early in the morning.

Since the first interruption, Dyn has tracked 16 other nationwide
Internet cuts.

"It is a strange and unique phenomenon," says Doug Madory,
director of Internet Analysis at Dyn. "I agree that the rationale
is very strange although not entirely without precedent."

Madory, who monitors Internet traffic around the world and has
repeatedly documented service interruptions in Egypt, Iran and
many other nations, said he’s not aware of any other instance
where a government repeatedly shut off Internet service so openly
and regularly.

"It must wreak havoc on businesses trying to operate there that
depend on external connectivity," he said.

Several requests for comment on the outages to the Iraqi ISPs
Baghtel and ATS-Iraq were not returned.

"Our registration number has been canceled [for the Chinese
hosted site], and our ... domain name from our server in the
United States has been blocked," Li said.

"Everyone knows our website's main theme is anti-corruption, and
another big theme is rights activism."

Li said it wasn't hard to imagine the motivation for falling foul
of the complex system of blocks, filters and human censorship
known collectively as the Great Firewall.

"When we are overseeing government, there is nowhere we won't go;
it doesn't matter who you are [as an official]; if you are
corrupt, we will expose you," he said.

"So of course we are going to cause a reaction among some people,
to stir up feelings among some people in power," Li said, adding
that the site has already changed domain names 50-60 times this
year.

The attacks on the rights websites come as Beijing rolls out a
slew of draconian new laws aimed at further clamping down on
freedom of expression online.

The draft law aims to "ensure network security, [and] safeguard
the sovereignty of cyberspace and national security," according
to the NPC’s official website, and will ensure Chinese Internet
users aren’t allowed to "disturb the social order, [and] harm the
public interest."

The agency last month set out a series of violations of rules on
web content that could prompt a summons to "drink tea," a
technique traditionally employed by the state security police to
warn, interrogate and intimidate rights activists and dissidents.

Sites deemed to have published banned content—which might include
"false information, pornography and rumors" will be obliged to
send a representative to such meetings, according to official
media.

Reported by Qiao Long for RFA's Mandarin Service. Translated and
written in English by Luisetta Mudie.

Visitors walk in a field of sunflowers during the 2015 Zama
Sunflower Festival in Zama, Kanagawa prefecture, Japan. 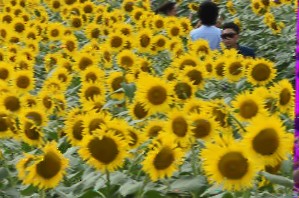