Welcome to program 127 of VOA Radiogram from the Voice of
America.

A controversial new Russian law on the retention of personal
computer data has gone into force, raising questions about the
possible impact on the world's largest Internet companies and the
privacy of the customers they serve -- and whether the law can
even be effectively enforced.

The law, which took effect on September 1, requires Russian and
foreign companies to store data for customers who are Russian
citizens on servers housed on Russian territory.

That has sparked concerns among privacy advocates who fear the
law will further restrict speech in Russia, where the Internet
has served as a freewheeling and largely unhindered forum for
public debate, particularly compared with traditional media
outlets.

But, he said, "the big test for the principle is certainly
Russia, and it's not too terribly surprising given what's been
happening in Russia recently."

Despite earlier efforts by former Russian President Dmitry
Medvedev, now the prime minister, to instill a Silicon
Valley-style ethos in Russia, the Kremlin's attitude toward the
Internet has cooled since Vladimir Putin's return to the
presidency in 2012. Last year, Putin publicly called the Internet
a "CIA project."

Regulators have also adopted increasingly strict regulations on
bloggers, requiring them to register if they reach a certain
threshold of readerships or followers.

Companies that don't comply with the new law will be included in
a blacklist, under court order by Roskomnadzor, and subject to a
fine of up to 300,000 rubles, or around $5,000. Roskomnadzor can
also order Internet providers to block access to violators.

'Race To The Bottom'

It was unclear exactly what impact the law would have on major
international Internet companies, and which ones would comply the
law.

According to Roskomnadzor, eBay and PayPal are among the most
notable companies agreeing to house data on Russian-based
servers, along with hardware makers Lenovo and Samsung, and the
web-based taxi service Uber.

"The challenge that Russia finds itself in, is how you enforce
your law on companies and services that aren't based in Russia?"
said Danny O'Brien, international director for the nonprofit
advocacy group Electronic Frontier Foundation.

"If Russia is requiring Facebook and Google house servers in
their territory, what's to stop any other country from requiring
the same thing?" he added. "It's a race to the bottom."

Among those whose compliance was in doubt, however, was Facebook.
The Russian newspaper Vedomosti reported on August 26 that the
U.S.-based social media giant did not intend to comply with the
law.

Roskomnadzor confirmed in a statement that its chief had met with
a Facebook representative but declined to characterize the
discussions.

Facebook, which is headquartered in California, refused repeated
requests to comment. A spokesman told RFE/RL in an email: "We
regularly meet with government officials and have nothing more to
share at this time."

Microsoft said only that some of its services were subject to the
new law and that the company would comply with those services.

"We don't believe we customize or market our consumer services to
Russian citizens in a way that makes them subject to the new
law," a company spokesman said in a statement.

Google refused to comment on the law, as did other major
companies, such as IBM.


From the VOA Russian Service:

Five Chinese Navy ships have been spotted in international waters
off the coast of Alaska, according to U.S. officials, in what
many analysts see as a fresh attempt by Beijing to project
military power far from its shores.

Pentagon spokesman Bill Urban on Wednesday confirmed the presence
of the five vessels, noting that it is the first time the U.S.
has observed Chinese Navy ships in the Bering Sea.

"We respect the freedom of all nations to operate military
vessels in international waters in accordance with international
law," he said, adding that the U.S. military is tracking the
ships.

White House spokesman Josh Earnest said U.S. officials have not
detected any "threatening activities" by the ships, but said the
intent of their presence was "still unclear."

But it is not likely Beijing planned the deployment to coincide
with Obama's trip, said Ralph Cossa with the Center for Strategic
and International Studies.

"I would guess that their presence during Obama's visit is
coincidental more than deliberate. Because deployment like that
is normally planned months in advance and I don't think anyone
knew Obama was going to be in Alaska until a few days ago," Cossa
told VOA.

However, the presence of the ships is meant to send a message to
the U.S., he added.

"What it's saying is that at some point the Chinese are going to
be just as obnoxious as we are when it comes to sailing around in
international waters close to the other country's shores, and we
should get used to it," he said.

The U.S. military has numerous bases in Asia and regularly
conducts various air-and-ship-based activities off China's coasts
in international waters.

"And China has repeatedly expressed its concerns about that,"
noted VOA Beijing correspondent William Ide. "It feels like
China's trying to say if you're going to continue to do this,
we're going to do the same."

U.S. officials say the Chinese flotilla is made up of three
surface warfare ships, one amphibious assault ship, and a
replenishment vessel.

If that is the case, the deployment represents less of a threat,
and more of a projection of power, according to Scott Harold of
the RAND Corporation.

"A replenishment vessel says to me this is in part a
demonstration of its capacity to operate far from their shores,"
Harold told VOA.


"And an amphibious assault vessel would be absurd as a threat. No
one is going to invade the United States by ground or by sea,
much less are they going to do it in Alaska. But it is a symbol
of China's ability to project naval or amphibious forces at some
distance from China," he said.

The deployment fits a larger pattern by China's navy, which is
rapidly modernizing and attempting to venture out well beyond its
shores.

And even though it does not border the resource-rich polar
region, Beijing has made it clear that it wants to be regarded
internationally as a "near-Arctic power," said Harold.

"Chinese leaders have clearly recognized that the resources that
may be in the Arctic, the sea lines of communications that
transit through the Arctic passageways that may open up as the
ice melts are of tremendous potential value to China," he said.

Underscoring the strategic importance of the Arctic, Obama this
week used his Alaskan tour to push lawmakers to speed up
construction of a new heavy icebreaker ship that can navigate the
region year-round.

The U.S. has just two functioning icebreakers, while Russia has
41. China unveiled its own icebreaker vessel in 2012, and plans
to finish construction of another by 2016. 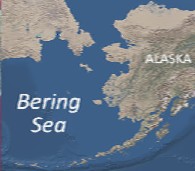 
From the VOA Spanish Service:

Image: Screen capture from the video version of this VOA Spanish
story ...