Begins with music and voice, then MFSK32 text-image-text centered on 1500 Hz.

Welcome to program 131 of VOA Radiogram from the Voice of
America.

A new map outlines the backbone of the U.S. Internet for the
first time.

Researchers have been trying to create the map for about 20
years, but a team from the University of Wisconsin, Colgate
University and the computer security company NIKSUN, finally made
it happen. Computer scientist Paul Barford says the resulting
report and map represent hours of painstaking work.

"The complexity of Internet infrastructure has gone well beyond
what a single entity can actually understand today," he said.
"The map shows the first-of-its-kind representation of the
long-haul links in the United States that make up the Internet."

AT&T is the largest owner of Internet infrastructure in the
United States. Other leading owners include Level 3, Sprint, and
Windstream. Before this map was created, none of these providers
knew where all of the conduits were buried.

Barford expects the diagram to help create a stronger, more
secure and robust Internet. He also anticipates it will help the
FCC make decisions on how to regulate the Internet, should its
network infrastructure become public.

The map's release raises security concerns about whether it gives
enemies of the United States, or enterprising hackers, a road map
for disrupting the nation's Internet.

Barford and his team, working in cooperation with the U.S.
Department of Homeland Security, chose the latter. To be on the
safe side, the publicly-released map isn't as detailed as it
could be.

The intent in creating the map, Barford said, it to make things
better, not worse.

"It gives us a platform for improving the Internet," he said,
"and for researchers to ask longer-term questions that
potentially result in the Internet of the future that gives us
features and functions and capabilities that young people are
dreaming up right now."

If the researchers have their way, with the backbone of the
Internet already all mapped out, those dreams will come true just
a little bit faster.

China's public security ministry is pressing ahead with moves to
force more of the country's 668 million netizens to use their
real names and a digital ID card online.

The move is part of a raft of tighter Internet controls enshrined
in the draft Cybersecurity Law being debated in China's
parliament, the China Youth Daily newspaper said in a recent
report.

Officials at the ministry are already preparing to implement the
measures, although the bill has yet to be passed into law by the
National People's Congress (NPC), the paper quoted cybersecurity
official Li Qingqing as saying.

The new regime will set out to clarify the responsibilities of
Internet service providers, account holders and the government
with regard to online behavior, Li told the paper.

The draft law aims to "ensure network security, [and] safeguard
the sovereignty of cyberspace and national security," according
to the NPC's official website, and will "ensure Chinese Internet
users aren't allowed to "disturb the social order [and] harm the
public interest."

While officials say the new system will improve the security of
users'
personal data and help fight cybercrime, online activists say it
is yet another way for the ruling Chinese Communist Party to keep
tabs on who is saying what online.

"The overall aim of the Chinese Communist Party is to further
tighten control on dissidents, including democracy activists," an
online activist identified by a nickname "Xiaofei Riyetan" told
RFA on Thursday.

"This will add greater weight to their attempts to accuse these
people of crimes, and enable them to lock them up in the name of
the rule of law," he said.

He said recent surveys showing that netizens feel less safe
online than they did previously have more to do with a sense that
everything they do or say is being watched, than with cybercrime.

"The crackdown on dissents has got worse and worse since
[President] Xi Jinping came to power," the activist said.

"The space for free expression is getting smaller and smaller,
and ever more tightly managed; that's why we feel more and more
unsafe," he said.

Reported by Hai Nan for RFA's Cantonese Service, and by Yang Fan
for the Mandarin Service. Translated and written in English by
Luisetta Mudie.

WASHINGTON - Washington's Chinatown was once the home of many
Chinese immigrants. But over the years, the Chinese population
has decreased sharply, which has caused the local Chinese culture
to fade.

Artist Tiesheng Dai is one of the few Chinese residents remaining
in the U.S. capital's Chinatown. He used to have two art
galleries. But rent hikes forced him to close both of them. A
sign outside the building is the only evidence they existed.

The area's housing costs have been pushed up over the years by
other ethnic groups flooding in. Its Chinese population has
shrunk from a high of 3,000 to around 300 today.

Chinatown began to develop decades ago, as new immigrants moved
there because most of them faced language and cultural barriers
in other neighborhoods.

"As quickly as the kids they bring over assimilate [adopting] the
English language, the parents actually lean on them to [say] 'you
know, we are gonna move. You are gonna help us to register
yourself for school in another school district.' We don't
actually need a Chinatown English speaking translator or liaison
to help get us there," Fong says.

Most of the current Chinese residents have low incomes and
receive government subsidies. Many live in Museum Square, one of
Chinatown's two affordable apartment houses. But the government
subsidy for this complex expires in October, and the owner plans
to replace the building with modern high-rise condos. So the
residents are being forced to move out.

Dai, the artist, has lived here for almost nine years. He says
the remaining residents don't want to move.

"There are a lot of kids and elderlies. Some of the kids were
born in the complex. Some families with three generations are
living together. Some of them have been here longer than me, for
more than ten years. Some for 20 some years," Dai says.

If affordable housing is no longer available, the residents may
not be able to stay in the Chinatown area, according to Derek
Hyra, the director of American University's Metropolitan Policy
Center.

"A fair market rental unit in the Chinatown area goes for $1,200
a month. Every unit that has been built in the Chinatown area,
for a one bedroom [apartment] averages about $2,000 a month. That
means if the residents in those two buildings are displaced, they
will not be able to use their [housing subsidy] voucher in the
Chinatown community," he says.

Hyra says without Chinese residents, the local government cannot
promote Chinatown as an authentic ethnic tourist attraction. He
says the neighborhood contributes to the city's diversity, and
that is key to Washington's economic growth.

"I think that cities that are more racially tolerant and
ethnically and racially diverse tend to be the places that have
the most innovation. There is association between diversity and
economic development," says he.

And Tom Fong says, when it comes to retaining Chinese culture,
Chinatown matters.

"My hope is that my kids and their kids will still have that
touchstone of Chinatown to be a part of and come down here to
perform [the] lion dance, and to do Kong Fu and spread our
culture, to retain our culture for generations to come," Fong
says.

Image: Screen capture from the video version of this VOA News
report ...


Some VOA Radiogram listeners may remember when Radio Sweden was
on shortwave. In 2010, Radio Sweden ended its shortwave and
medium wave broadcasts, but continued with a daily English radio
program on the Internet. Soon there will be less radio from Radio
Sweden.

Starting Monday, October 5, 2015, Radio Sweden will relaunch with
a new focus on all things digital: web, mobile and social media.
This means that we'll be discontinuing our daily radio broadcasts
and instead, we'll be providing you with a better news service
online, which you can access any time.

We'll still broadcast every week on Thursdays from 16:30 to
17:00. This broadcast will air again on Mondays at the same time
and can be downloaded as a podcast whenever you like. It will
also be available through Swedish Radio's smartphone app.

With our digital relaunch, we look forward to keeping in touch
with you via social media, where you can comment on our stories,
share your views on interesting questions or let us know about
something we may have missed.


Kim's note: I am guessing that "16:30 to 17:00" refers to Central
European Time. Please write to info@radiosweden.org, and let them
know you read this news -- via shortwave! (Maybe also attach the
image of their English team -- to be transmitted next.)

Here are some pics of  F8BMI [Andre Petton, 3 Impasse Coz Castel, Le Conquet 29217, France]  received in the last time. 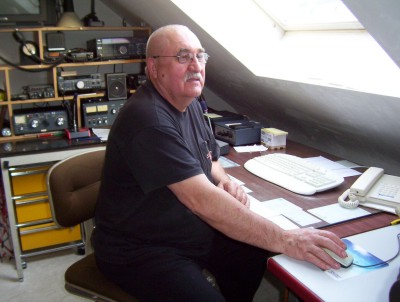