Welcome to program 135 of VOA Radiogram from the Voice of
America.

Two VOA Radiogram broadcasts have new frequencies as of this
weekend. Here is the new schedule for the B15 shortwave frequency
season:

All via the Edward R. Murrow transmitting station in North
Carolina.

As a follow-up to last weekend's reports about possible Russian
experiments to cut off international Internet traffic, a story by
VOA's Doug Bernard was published on 23 October, after last
weekend's VOA Radiogram had been produced ...

Russian Ships Near Data Cables Are Too Close for U.S. Comfort

WASHINGTON - Russian submarines and spy ships are aggressively
operating near the vital undersea cables that carry almost all
global Internet communications, raising concerns among some
American military and intelligence officials that the Russians
might be planning to attack those lines in times of tension or
conflict.


Additional stories about this subject:

Internet censorship around the globe continues to intensify.
According to a report by the independent monitoring group Freedom
House, for the fifth consecutive year, more nations are censoring
information online and demanding that companies and individuals
remove content or face retribution.

The annually released Freedom of the Net Report assessed 65
countries and identified China as the worst offender. University
scholar Ilham Tohti, who became a leading voice in the Uighur
opposition to Beijing's policies, was sentenced in September 2014
to life in prison for questioning online the government's
decisions. This is one of the toughest sentences in the country
in recent years.

Freedom House said China is only one nation in which this type of
crackdown has been increasing. In Russia and Iran, people who
post content deemed offensive by the government can quickly and
easily land in prison.

"Those countries tend to block materials of political and social
relevance. They tend to arrest users for writing about human
rights and opposition," said Sanja Kelly, director of the report.

Syria is the second-worst performer in the study. Bloggers,
journalists and activists face execution by armed groups in the
country, according to Freedom House. 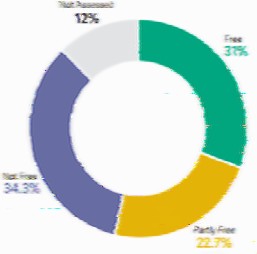 
Runaway US Military Blimp Back on Ground

A large, unmanned U.S. military blimp that broke loose from its
tether Wednesday and floated over Pennsylvania for several hours
is back on the ground after deflating.

The aircraft landed in a wooded area near a small town north of
the state capital, Harrisburg. There were no reports of injuries
or serious damage, but about 30,000 people lost electricity as
the blimp's long mooring cables snapped power lines while it
drifted.

Two F-16 fighter jets trailed the blimp during its unplanned
flight, but there were never any plans to shoot it down.

The blimp broke away from its mooring at the Aberdeen Proving
Grounds in northern Maryland on Wednesday afternoon and drifted
north into central Pennsylvania. It caused excitement in small
farming towns, with people taking pictures and telephoning
police.

The unmanned blimp was the same kind used to provide surveillance
against missiles and other airborne objects in Afghanistan and
Iraq.

Defense Secretary Ash Carter told reporters the blimps have
broken loose before in Afghanistan. It is unclear how Wednesday's
incident happened, but Carter said bad weather might have been
involved.

Officials also were uncertain what caused it to deflate.

A second blimp at Aberdeen used for fire control will be grounded
until an investigation is complete.

Image: The blimp while still aloft over the Army's Aberdeen
Proving Ground in Maryland ...

Pumpkins More Popular than Ever in US

October means many things. It means Halloween, harvest season,
or just the arrival of fall, and falling leaves. But no matter
which part of October you celebrate, the pumpkin is likely to be
part of the party.

At Cox Farms Fall Festival in the Washington suburbs, picking out
the perfect pumpkins is a big part of fun.

"Every year we come here. Bring the family out for the festival
and get the pumpkins for Halloween carving. It is just a family
tradition," said a visitor.

"These big guys are about 25 pounds. This white blueish one, we
are going to eat that one," said another.

The pick-your-own farm offers a variety of pumpkins and gourds in
different sizes, shapes and colors.

"We offer 40 or 50 different varieties of pumpkins, and all
together 150,000 pumpkins will go through this place," said Lucas
Cox, co-owner of Cox Farms.

Lucas Cox, second generation co-owner, says his family has been
holding this fall festival since 1983, and it has grown every
year.

"We have over 100, 000 visitors for the season. I think
Halloween is the fastest growing holiday in the US. And the
pumpkins are the staple of Halloween. You cannot have Halloween
without pumpkins. So that means pumpkin business is growing
every year," said Cox.

As the weather cools, pumpkins appear on front porches, roadside
stands pop up everywhere, and grocery stores overflow with
pumpkins and pumpkin products.

According to a market research firm, Americans spent more than
$350 million on pumpkin-flavored products last year.

"We are selling pumpkin spice [drinks] from early September
through mid-November and it sells really well," said barista
Marcia Vernor.

"It is pumpkin beer. I've never tried before. But it is that time
of the year when we start eating pumpkin or drinking pumpkin, in
this case," said a customer.

However,in the Midwest where 90 percent of the nation's pumpkins
are grown bad weather has had an impact.

"The late summer rains in the Midwest really hurt the pumpkin
crop. And the pumpkin supply is really starting to tighten up
this year," said Lucas Cox.

Cox says he has enough pumpkins to make this years festival a
success. And next year he expects farmers to harvest even more
to meet a growing demand.


Image: Screen capture from the video version of this VOA News
story ... 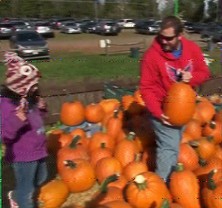