Welcome to program 137 of VOA Radiogram from the Voice of
America.

CAPE CANAVERAL, FLORIDA - Scientists have discovered what appear
to be ice-spewing volcanoes on the surface of Pluto, raising
questions about how the tiny, distant world has been so
geologically active, according to research presented on Monday.

The findings, released at an American Astronomical Society
meeting in National Harbor, Maryland, paint a far more
complicated picture of Pluto and its moons than scientists
imagined.

"The Pluto system is baffling us," planetary scientist Alan
Stern, with the Southwest Research Institute in Boulder,
Colorado, told reporters during a webcast news conference.

Stern heads the team working on NASA's New Horizons spacecraft,
which made an unprecedented pass by Pluto on July 14.

Pictures and measurements taken during the encounter are still
being transmitted back to Earth.

Among 50 reports that New Horizons scientists will present this
week is a startling look at two mountains on the surface of
Pluto, each measuring more than 100 miles (161 km) in diameter
and several miles (km) in height. The tops of the mountains have
depressions similar to volcanoes found on Mars and Earth.

"Nothing like this has ever been seen in the outer solar system,"
said New Horizons scientist Oliver White, with NASA's Ames
Research Center in Moffett Field, California.

Rather than spewing molten rock, volcanoes on Pluto would have
released frozen water, and other ices such as nitrogen, ammonia
or methane.

White admits the idea of volcanoes on Pluto, which is about 30
times farther away from the sun than Earth, sounds crazy, "but
it's the least crazy thing we can [think] of" to explain the
mountains.

"Whatever they are, they're definitely weird," White said.

New Horizons also found several deep fractures in Pluto's
surface, the largest of which spans more than 200 miles (322
km) in length. The top of the fracture is about 2.5 miles (4
km) higher than the base - more than twice as high as walls of
the Grand Canyon.

"The fact that there are so many large faults in this part of
Pluto indicates that the crust has experienced a major extension
at some point in its history," White said.

Scientists suspect the decay of naturally occurring radioactive
elements in Pluto's core was the heat source for its
transformation.

New Horizons is on track for a possible January 2019 pass by
another frozen mini world in the Kuiper Belt region of the solar
system, which is home to Pluto, its moons and thousands of other
icy bodies. 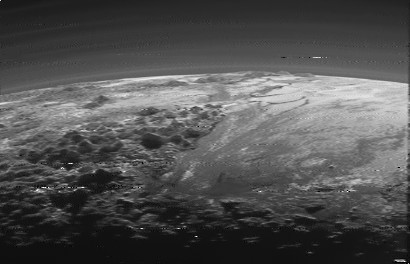 CERRO LAS CAMPANAS, CHILE - Chilean President Michelle Bachelet
put hammer to stone on an Andean mountaintop on Wednesday evening
to mark the start of construction for one of the world's most
advanced telescopes, an instrument that may help shed light on
the possibility of life on distant planets.

The Giant Magellan Telescope (GMT), scheduled to be completed by
2024, will have a resolution 10 times that of the Hubble
spacecraft. Experts say it will be able to observe black holes in
the distant cosmos and make out planets in other solar systems
with unprecedented detail.

Such technology, astronomers say, will help humans determine how
the universe formed and if planets hundreds of light years away
could support life.

"With this science, there are no limits to the possibilities that
are open," said Bachelet, standing on the GMT's site, a
wind-buffeted, 8,250-foot (2,500-meter) mountaintop.

"What it does is open the door to understanding," she said.

The GMT - a collaboration of institutions in the United States,
Chile, South Korea, Brazil, and Australia - will rely on seven
intricately curved lenses, each almost 28 feet (8.5 meters) wide.

For the system to work, no one lens can have a blemish of more
than 25 nanometers, which is some four thousand times smaller
than the average width of a human hair.

"Astronomy is like archaeology; what we see in the sky happened
many years ago," said Yuri Beletsky, a Belarussian astronomer for
the GMT. "The biggest expectation is that we find something that
we don't expect," he added on a bus driving up sinuous
switchbacks to the planned observatory.

Two other massive instruments - the European Extremely Large
Telescope, also in Chile, and the Thirty Meter Telescope in
Hawaii - are scheduled to be completed in the 2020s as well. But
GMT President Patrick McCarthy says the telescope's massive
single lenses and wider observation field will allow for more
precise measurements.

Among the phenomena he hopes to observe is dark matter,
mysterious invisible material that makes up most of the
universe's mass.

Astronomers say Chile's bone-dry Atacama Desert, host to the GMT
and dozens of other high-powered telescopes, is uniquely suited
to space observation as it has dry air, high mountains, and
little light pollution.

McCarthy also points out that another advantage for astronomers
in Chile is that the airflow from the nearby Pacific Ocean is
smoother than that over continental deserts, meaning scientists
have to contend with less atmospheric interference.

It's a bit unclear how long it takes poly-styrene based products
like Styrofoam to decompose. But no matter if it's 500 years, or
5,000, it's a long time in human terms, and it illustrates the
scope of the problem we are creating every time we use disposable
plastics. But scientists may have discovered an unusual way to
break down this plastic garbage.

It takes hundreds of years to biodegrade Styrofoam, and those
plastic plates, cups and containers currently take up between 25
and 30 percent of our landfill space.

But these little guys might be able to fix the problem, by
literally munching the plastic away.

It turns out mealworms have a taste for Styrofoam.

"Mealworms eat Styrofoam and they digest Styrofoam in their gut.
The process was very fast. In less than 24 hours it became CO2,"
said Stanford University's Wei-Min Wu.

Each worm can digest plastic waste about the size of a pill every
day.

Special enzymes in their gut break down the styrofoam.

"I think the secreted enzymes are really interesting. Those are
the tools that actually break the wall down into little pieces,"
said Craig Criddle.

Researchers are trying to develop enzymes that mimic the worm's
ability to break down plastic waste.

"It’s an issue because we are running out of landfill space for
one thing, especially in dense urban environments. Also, the
clutter that results, particularly in the ocean everyone hears
about, but all around the world," said Criddle.

Surprisingly, environmental scientists found mealworms chomping
on Styrofoam were just as healthy as those that ate their normal
diet of bran.


Image: Screen capture from the video version on this VOA News
story ...


Confusion as Bright Light Flies over US West Coast

A bright light moving across southern California Saturday night
[7 November] brought confusion and speculation from witnesses on
the coast.

Some described it as a shooting star while others said it was a
rocket. Other observers added that they saw it explode before the
light trail began.

The light came from a planned missile test by the Navy, the
Pentagon said in a statement.

The Navy Strategic Systems Programs had tested an unarmed Trident
missile flight from the USS Kentucky, a ballistic missile
submarine, off of the west coast.

This kind of procedure happens frequently, the Pentagon said.

"Each activity provides valuable information about our systems,
thus contributing to assurance in our capabilities," the
statement said.

The Navy said it does not announce military tests, but Los
Angeles International Airport did announce night flight routes
were going to be affected until November 12 to accommodate for
military airspace use.