You might now be hearing the interval signal of Radio Romania
International, co-channel with KBC on 7395 kHz

When RRI signs on in French at 0200 UTC, the opening music is
from the Romanian Rhapsody No. 1 by George Enescu ...


It's the same melody that was used to begin Radio Bucharest
broadcasts during the Ceaușescu era.

Welcome to program 141 of VOA Radiogram from the Voice of
America.

The U.S. space agency NASA says it has uncovered some "well-kept
secrets" behind the mysterious bright spots on the dwarf planet
Ceres.

Ceres, which orbits the sun between Mars and Jupiter, has more
than 130 bright spots, most located near impact craters.

Using data from NASA's Dawn spacecraft, scientists believe they
are caused by "a kind of salt."

The spots, researchers say, were likely caused when asteroids
unearthed a mixture of ice and salt.

Researchers said the inside of one crater, Occator, which
contains the brightest spot, reflects about 50 percent of the
sunlight that hits it. This is in contrast to the rest of the
planet which is "similar in brightness to fresh asphalt."

The crater is 90 kilometers in diameter and appears to be one of
the younger craters on Ceres--about 78 million years old.

Researchers noted that in some views of Occator there appears to
be a "diffuse haze near the surface that fills the floor of the
crater." This could be associated with a 2014 observation of
water vapor on the Ceres.

In another study using data from Dawn, researchers say there is
evidence of ammonium-rich clays on Ceres.

While ammonia alone would evaporate, the detection of it means it
may be chemically bonded to other minerals.

More importantly, the presence of ammoniated compounds could mean
that Ceres did not "originate in the main asteroid belt between
Mars and Jupiter" but rather could have formed in the outer solar
system or formed from materials that originated in the outer
solar system.

The Dawn probe is now in its final orbital altitude of 385
kilometers and will begin collecting more information about the
dwarf planet.

Both studies were published in the journal Nature. 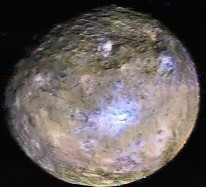 TALLINN, ESTONIA - The Baltic seabed, littered with war debris
and shipwrecks, has fascinated historians and researchers through
the ages. But the underwater search robots they use pose problems
by further disturbing the silty waters with their propeller
movements.

Estonian engineers say they may have found a solution with their
latest invention — a small, propeller-less underwater robot that
causes minimum disturbance and lowers the risk of damage to
submarine archaeology.

The unique feature of the U-CAT, about the size of a vacuum
cleaner, is four silicon flippers inspired by streamlined sea
turtles' arms and legs.

"They move in a slow and quiet motion and won't bring up sediment
from the [sea] bottom," says Taavi Salumae, a designer at the
Biorobotics Center of Tallinn University of Technology.

The underwater probe has been developed since 2012 in the
EU-funded Arrows project that focuses on new technologies for
marine research. It can stay submerged for four hours at a depth
of 100 meters (330 feet) on a single battery charge of two hours.
It's equipped with a camera and lights.

Most importantly, it can easily be rotated in tight spots that
are too dangerous or difficult for human divers.

Salumae says the U-CAT, an acronym for Underwater Curious
Archaeology Turtle (winner of a Facebook contest to name the
robot), is one of the first robots designed to go inside
shipwrecks and help underwater archaeologists study interiors of
locations.

But its small size has a few drawbacks: It is limited to shallow
waters, unlike large robots, some of which can reach depths of
six kilometers (20,000 feet) without damage from water pressure.
And it is not remotely controlled like traditional wired probes,
which means there's also a risk of losing it during missions.

Last summer, it was successfully tested in the Baltic Sea and the
Mediterranean by a group of European researchers.

Priit Latti, a marine archaeologist from the Estonian Maritime
Museum, watched the probe dive to a flooded Soviet-era prison in
July off the Estonian coast, and was impressed.

"The fact the robot uses flippers for movement is a huge
advantage," he said. "It can move in every direction."

Latti says the museum is considering it for future undersea
investigations, possibly to study the remains of a 17th-century
vessel recently found in Estonian waters.

Bordered by Finland, Sweden, Russia, the Baltic nations, Poland,
Germany and Denmark, the Baltic Sea is rich in historical wooden
wrecks dating back to the 15th and 16th centuries, well-preserved
because of the sea's low salinity and cool water that help keep
marine shipworms away.

Divers regularly make discoveries, including an 18th-century
shipwreck filled with drinkable vintage champagne near the
Finnish Aland Islands, and a few months ago Finnish divers
located a German submarine, the U-679, which sank in the Gulf of
Finland in 1945.

"A diver can stay submerged and film only for a limited time,"
said Immi Wallin, head of the Finnish diver group which located
the U-679. "This kind of robot can fit into very tight places and
enter into a ship's cargo hold through a narrow door."

The U-CAT prototype isn't commercially available yet, but Salumae
said the response has been positive.

He claims it's some "three to four times" cheaper than the "large
and expensive" mostly propeller-powered robots, which are used by
the military and the oil and gas industry and run into tens of
thousands of dollars.

"Our goal was to develop this robot at a relatively low cost,"
Salumae said. "We don't use very complex sensors."

Image: The U-CAT robot is prepared for testing in an aquarium in
Tallinn ... 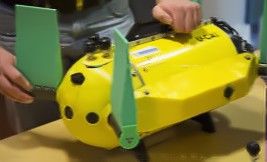 Russian prosecutors have launched an inspection against the
independent TV channel Dozhd, known for its critical coverage of
President Vladimir Putin and which regularly provides a platform
for opponents of the government.

Dozhd's director general, Natalya Sindeyeva, said in a December 7
Facebook post that city prosecutors visited the channel's office
earlier in the day to check its compliance with laws on extremism
and terrorism, labor, and licensing.

Prosecutors from Moscow's Ostankino District demanded that Dozhd
hand over documents, including employee contracts, tax records,
and a list of any foreign employees, according to a scanned copy
of a notice from prosecutors that Sindeyeva posted on Facebook.

The document states that the inspection was initiated on the
basis of "appeals from citizens."

Sindeyeva wrote that fire inspectors came to the office after
prosecutors.

The Internet and cable TV company has gained a reputation as one
of Russia's most tenacious and hard-hitting news outlets amid the
Kremlin's tightening control of the country's media landscape
since Putin's return to the presidency in 2012 following a
four-year stint as prime minister.

It has previously come under fire for its reporting and was on
the brink of demise last year, when nearly all cable networks
dropped it in a matter of days amid what Dozhd called a
state-orchestrated intimidation campaign.

Nationalist federal lawmaker Aleksei Zhuravlyov in September
called on prosecutors to examine Dozhd's labor conditions and use
of partner content.

Zhuravlyov accused the channel of improperly using content from
the BBC and Germany's Deutsche Welle that "discredits Russia's
efforts to settle the conflict in southeastern Ukraine."

Since April 2014, a war between Russian-backed separatists and
Kyiv's forces has killed more than 7,900 people in eastern
Ukraine, where a shaky cease-fire brokered by the EU and Russia
remains in place.

Dozhd has been one of the few Russian media outlets providing
critical coverage of Russia's seizure and annexation of Ukraine's
Crimean Peninsula in 2014 and Moscow's role in the conflict in
eastern Ukraine.

With reporting by rbc.ru and AP

Every year before Christmas, the Santa net is on 3916 kHz in the
75-meter ham radio phone band at 0130 UTC. Children and/or radio
amateurs can talk to Santa at the 'North Pole'.

This should be audible in North America and perhaps even in
Europe. 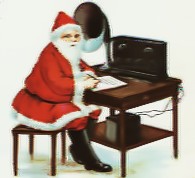 Closing image: This year's Christmas tree at the U.S. Capitol,
scaffolded during renovations ...