Here's a boat in Harlingen Harbor, where the KBC ship is docked,
illuminated for the holidays ...


Look at this boat during daylight to see what looks like a dipole
antenna ... 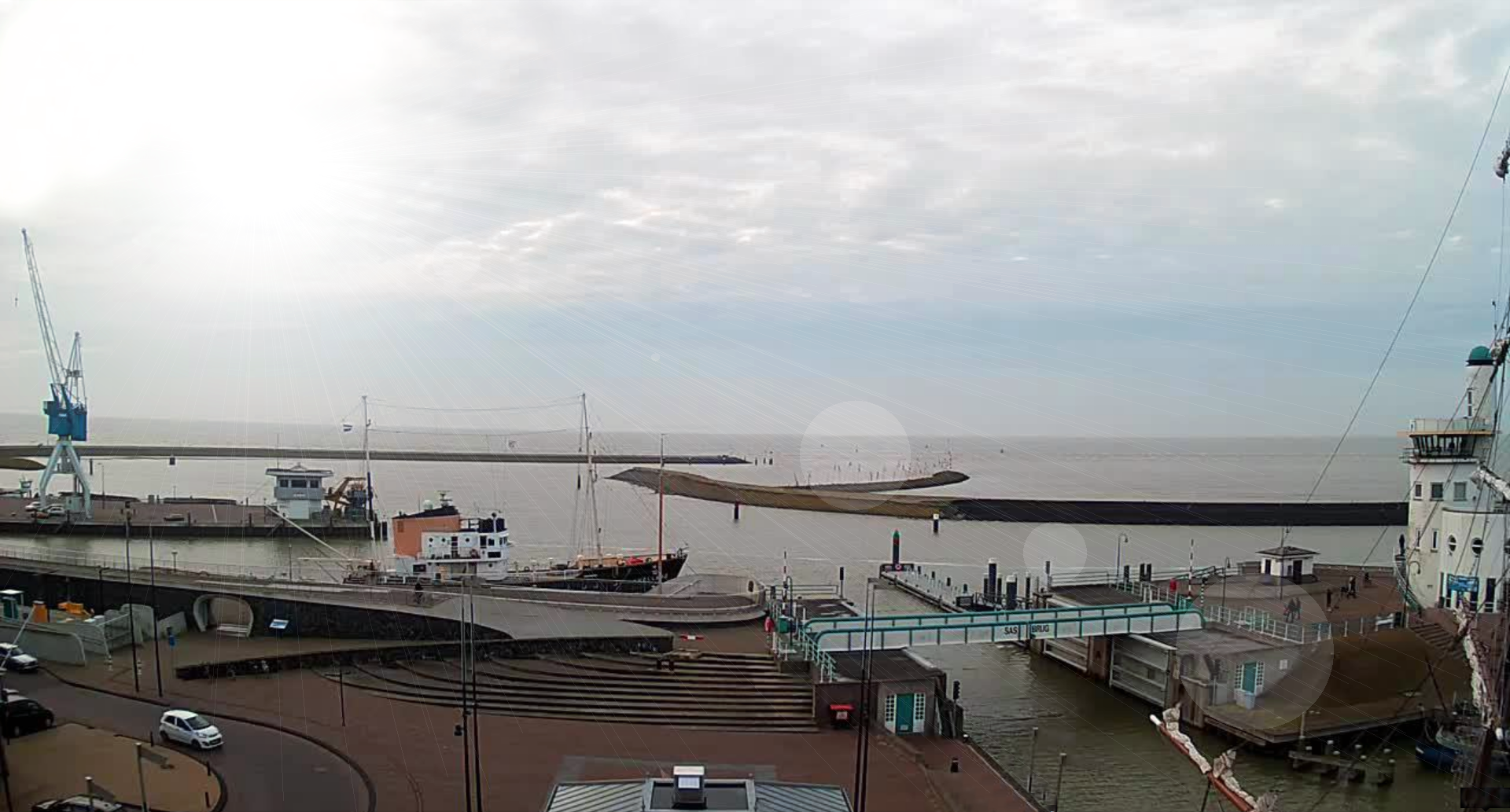 
Welcome to program 142 of VOA Radiogram from the Voice of
America.

A Blast of Gamma Rays from Halfway Across the Universe Detected

Back in April 2015, a surge of high-powered gamma rays from
half-way across the universe crashed into Earth's atmosphere.

But, according to the Harvard-Smithsonian Center for Astrophysics
in Cambridge, Massachusetts, the burst of gamma rays didn't put
any of us in danger and produced no noticeable effects since the
high-energy rays are blocked by Earth's atmosphere.

Astronomers, using space and ground based telescopes found that
this burst of powerful emissions came from a unique and active
galaxy 7.6 billion light years from Earth.

The galaxy, known as PKS 1441+25, is actually a rare, compact and
very bright mass of energy and light called a blazar.

The blazar's twin powerful and opposite directed jets of plasma
are driven at near light speed by a supermassive black hole
located in the center of the galaxy.

As a black hole sucks in a variety of matter, such as dust, gas
and even a star, it forms a surrounding high-energy accretion
disk of elementary particles such as photons, electrons and
positrons.

Friction is generated as these subatomic particles, from the
accretion disk, gets pulled into the black hole's point of no
return (event horizon). The friction heats tiny bits of material
into a plasma. The plasma combines with the black hole's
revolving magnetic field to form the blazar's jets.

While scientists are still arguing over the exact processes that
generate emissions from the jets, the researchers
say their findings will provide valuable clues.

April's gamma ray burst was observed and studied over a number of
different wavelengths with telescopes such as NASA's Fermi Gamma
Ray and Swift space telescopes and the Very Energetic Radiation
Imaging Telescope Array System (VERITAS) in Arizona.

The astronomers said their multi-wavelength observations of this
rare phenomena provided them with valuable insight into where
such gamma rays are produced, the various physical processes that
occur near the black hole, as well as a unique look into the
distant galaxy.

The researchers figured that the region where the burst of gamma
rays originated is probably about five light years from the black
hole, which is much further than they expected.

They also found that the size of the gamma ray emitting region
was around a third of a light year across, which was bigger than
what is normally observed in an active galaxy.

The astronomer's findings will be published in Astrophysical
Journal Letters, which are currently available online.


Image: Screen capture from the video accompanying this blog post
... 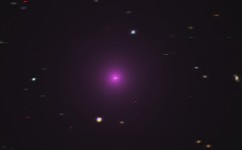 Local journalist Anaat Khan said the channel has been active for
almost a month and can be heard in the provincial capital
Jalalabad.

"They broadcast propaganda in their favor and against the state
in order to turn the people against the government. But in the
last decade people have become aware and they are not falling for
it," Zmaray said.

He added that it is a mobile setup and the government was not
worried because "the people will stand with the system and
against (IS)."

But Khan said the local population is scared.

"They dislike IS, but they are so scared that they will listen to
anything," he added.

Khan, who has heard the broadcast, said IS asks the local
population whether they prefer them or the government and
promises the local population victories over their enemies.

"They say that they will fly the black flag first in Kabul, then
in Islamabad (Pakistan), and afterwards in all the capitals of
Muslim world," Khan said.

Provincial governor's spokesman Attaullah Khogyani said they are
making efforts to get the station off the air, according to local
TV Channel TOLO News. 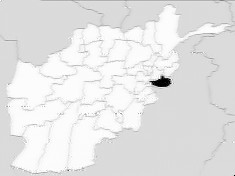 China Tries to Sell its Views on Internet Controls

BEIJING - Despite being the world's biggest censor of online
content, China is hosting a conference this week at a small town
in eastern Zhejiang province to try to sell its views about
Internet governance to the world.

The list of big international companies in attendance was short,
but did include the head of China Internet giant Alibaba and
Taiwan's FoxConn Technology.

In his speech, Xi argued all countries should jointly oppose
Internet surveillance and hacking, and urged countries to fight
against what he called a cyber arms race. He also spoke about
Internet sovereignty, a key position China uses to justify its
tight controls.

"We should respect each others' right to choose our own Internet
development paths and Internet governance models, Internet public
policies and the equal right to participate in international
cyber governance," Xi said, adding that "(we should) oppose cyber
hegemonism, not interfere in others' internal affairs, not
participate, connive or support cyber activities that jeopardize
others' national security."

China has some of the world's most sophisticated Internet
controls.

It has long had a key aim of controlling public opinion to keep
the Communist Party in power.

Companies that want to operate in China must accept that reality
or pack up and leave.

"Safeguarding the legal rights of foreign-invested businesses
will not change," Xi said. "As long as China's laws are
respected, we warmly welcome companies and entrepreneurs from all
countries to invest in China."

On social media, some postings that were quickly taken down by
authorities mocked Beijing's hosting the event, asking why such
massive security had to be deployed to such a small town and
questioning China's role as host.

"The world is already connected by the Internet and here you are
[a country] that madly takes down posts, blocks sites, wipes out
anonymity and clings to your old ways, resisting modern political
culture," one post said.

Qiao Mu, a professor at Beijing Foreign Studies University, said
the idea of China hosting the conference is laughable, given its
controls of the Internet and denial that it censors online
content.

"If China does not censor content, then why is it that in Wuzhen
(during the conference) that Facebook and Twitter can be
accessed, but not in other parts of China," Qiao said. 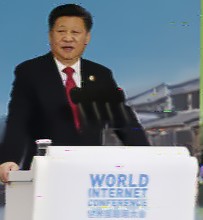 The International Space Station Russia team is making plans to
support a couple of SSTV events in the next few months. The first
session is being targeted for Dec 26-27 (subject to change) to
celebrate 15 years of amateur radio school contacts with the ISS
crew. The SSTV downlink mode will be PD120 which should allow for
the opportunity to receive more images in a single pass.

Kim: The frequency is 145.8 MHz, FM mode. During these events, I
leave my radio tuned to 145.8 all night. Using a 3-element yagi
on my chimney, there are usually a few SSTV images waiting for me
in the morning. 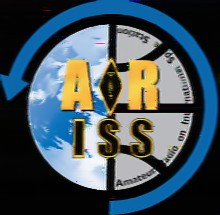 And finally, something for the holidays. One of my neighbors in
northern Virginia managed to attach Christmas lights most of the
way up a tall tree, creating a striking -- and very vertical --
image ... 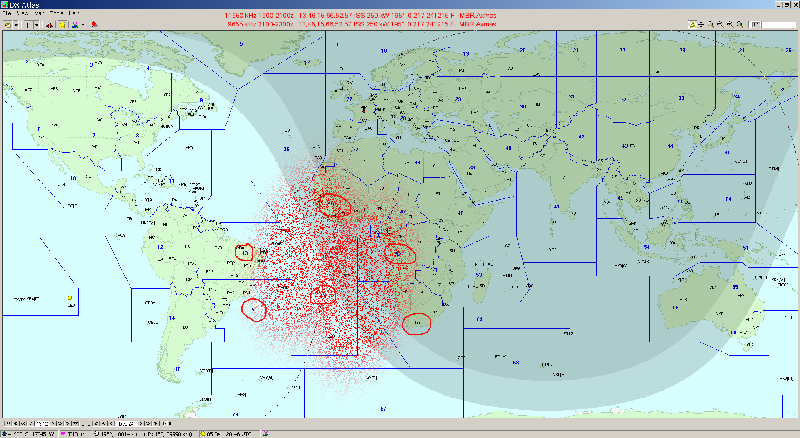 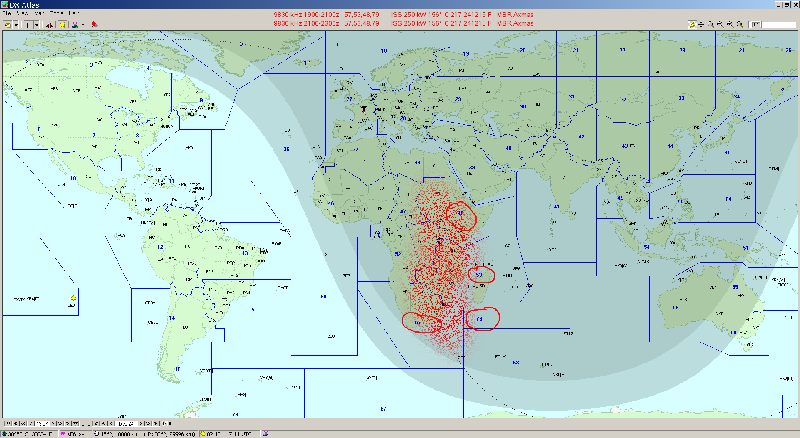 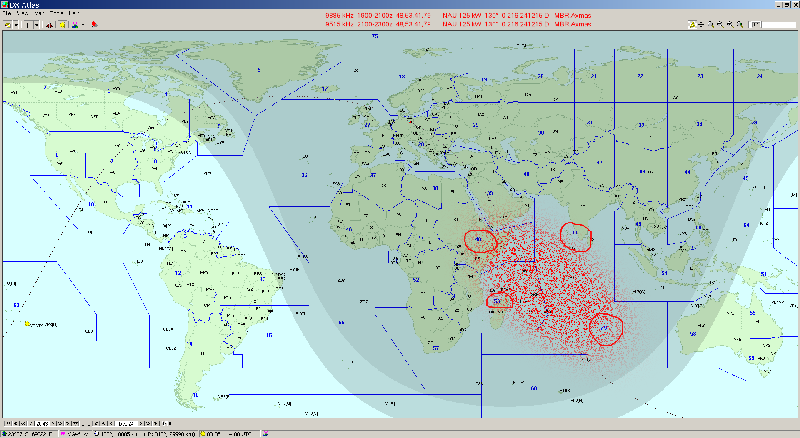 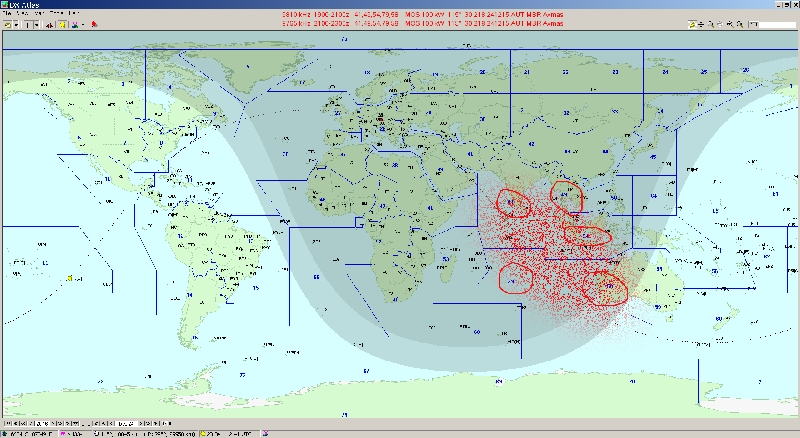