Welcome to program 144 of VOA Radiogram from the Voice of
America.


WASHINGTON - Congressional Cemetery — located near Capitol Hill —
is the only American "cemetery of national memory" founded before
the Civil War. Those buried there include legendary FBI director
J. Edgar Hoover, famed Civil War photographer Mathew Brady, and
many members of the U.S. Congress.

But in recent years, the cemetery has been overrun by weeds, and
officials didn't want to use herbicides because of the nearby
Anacostia River.

Instead, the cemetery has adopted a new method of weeding — which
is both cost-effective and environmentally sensitive.

"We are very close to the river," said Lauren Maloy,
Congressional Cemetery Program Director. "So we are always
looking for ways to make sure that we are sustainable, that we
are not using pesticides that might hurt the environment. As a
green cemetery in all senses of the word, we thought of the idea
of 'hiring' goats."

So the cemetery did just that. And the goats embarked on a
non-stop eating binge, as if they were at an all-you-can-eat
buffet. They're kept corralled on the cemetery grounds by an
electronic fence.

The goats are owned by Mary Bowen, whose farm runs a company
called Browsing Green Goats. The price tag to clean unwanted
vegetation: $4,500 per acre. It sounds expensive, but Bowen says
it's about half the price of using herbicides.

"The great things about goats: There's no instructions; they
don't take breaks; there's no union; they don't need Sunday
afternoon off … they just love eating!" Bowen said. "The only
time they will actually take a break to lay down is to let the
vegetation ruminate in their intestine. Otherwise, they are
eating."

Private residents can also hire these goats. Diana Davis and her
neighbors employ 35 goats to clean their yards in the Heritage
Harbor Community of Annapolis, Maryland.

"Oh, they are doing a wonderful job," Davis said. "Everybody's
thrilled. Because we all know how dense it was when they came.
And, of course, the neighbors keep coming over to see and they
are just amazed."

Which is what Bowen was hoping for when she started the project.

"The goats to me give such a sense of community and bring people
together for a common good," she said. "And that makes me feel
very good to be of service."

Bowen checks every day to make sure the electronic fence is
working properly; she says she has not lost a single goat in five
years. Her hope is that, through this approach, more people can
actively take part in protecting the environment, while keeping
their property manicured and weed-free. 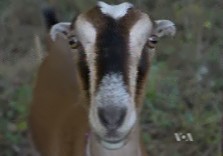 MOSCOW - Russia will revise its space program, the national space
agency said Tuesday, after a newspaper reported that ambitious
moon exploration plans and other projects may be facing massive
funding cuts.

Several Russian government ministries were engaged in revising
the space program up to 2025, Roscosmos, the federal space
agency, said in a written statement to Reuters.

It did not give details. But the Roscosmos statement and a report
in the Izvestia newspaper suggested Russia's prestigious space
program might also have fallen victim to government cutbacks
brought on by hard times.

Buffeted by low oil prices, Western sanctions and a falling
ruble, the Russian government is scaling back its spending plans
for everything from the health sector to welfare.

Izvestia published details of what it said was a draft proposal
sent by Roscosmos to the government that showed big spending cuts
in the moon exploration program were being proposed.

Russian Deputy Prime Minister Dmitry Rogozin announced in April
2014 that Moscow planned to build a big base on the moon that he
said would serve as a platform for scientific research.

Izvestia reported Roscosmos was proposing to cut the manned
flights segment of lunar exploration by 88.5 billion rubles
($1.22 billion), to 329.67 billion rubles, but said funding to
build a spaceship to fly to the moon would not suffer seriously.

Roscosmos, in its statement, declined to comment on those
figures, saying the revised program was still extensive.

"The revised project of the federal space program for 2016-25
envisages the study of the moon by automated orbiters, as well as
by building up scientific and technical potential for further
studies, including by manned missions," it said.

It declined to say whether Russia's plans for a moon base were
still alive, but said the first manned flight around the moon
would not take place before 2029.

President Vladimir Putin has spoken many times of rekindling
Soviet-era space glory. The USSR launched the first artificial
"sputnik" satellite in 1957, sent the first man into space in
1961 and conducted the first space walk in 1965.

But Cold War rival the United States made six manned landings on
the moon between 1969 and 1972, while the Soviet-built N-1 heavy
rocket, designed to take cosmonauts to the moon, failed to make a
single successful flight. 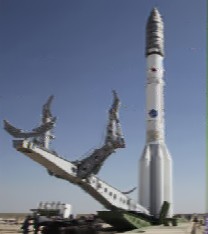 "NASA's Lunar Reconnaissance Orbiter (LRO) recently captured a
unique view of Earth from the spacecraft's vantage point in orbit
around the moon. ...

In this composite image we see Earth appear to rise over the
lunar horizon from the viewpoint of the spacecraft, with the
center of the Earth just off the coast of Liberia (at 4.04
degrees North, 12.44 degrees West). ...

LRO was launched on June 18, 2009, and has collected a treasure
trove of data with its seven powerful instruments, making an
invaluable contribution to our knowledge about the moon. LRO
experiences 12 earthrises every day; however the spacecraft is
almost always busy imaging the lunar surface so only rarely does
an opportunity arise such that its camera instrument can capture
a view of Earth. Occasionally LRO points off into space to
acquire observations of the extremely thin lunar atmosphere and
perform instrument calibration measurements. During these
movements sometimes Earth (and other planets) pass through the
camera's field of view and dramatic images such as the one shown
here are acquired. ...

"From the Earth, the daily moonrise and moonset are always
inspiring moments," said Mark Robinson of Arizona State
University in Tempe, principal investigator for LROC. "However,
lunar astronauts will see something very different: viewed from
the lunar surface, the Earth never rises or sets. Since the moon
is tidally locked, Earth is always in the same spot above the
horizon, varying only a small amount with the slight wobble of
the moon. The Earth may not move across the 'sky', but the view
is not static. Future astronauts will see the continents rotate
in and out of view and the ever-changing pattern of clouds will
always catch one's eye, at least on the nearside. The Earth is
never visible from the farside; imagine a sky with no Earth or
moon - what will farside explorers think with no Earth overhead?"
... 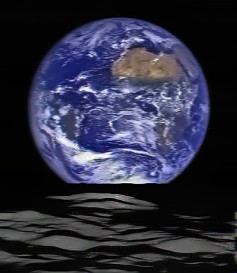 
Here is a picture of a VOA colleague's sailboat, illuminated for
the holidays and under a rising moon.

It's located on Lodge Creek off the Yeocomico River in Virginia,
south of Washington ... 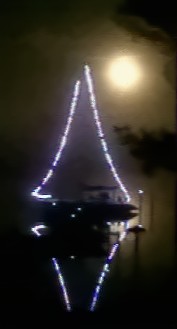