Or, if you're in Europe, yesterday.


More about WRD and shortwave via these links:

Welcome to program 150 of VOA Radiogram from the Voice of America.

An international team of scientists was able to find hundreds of
nearby galaxies that had been hidden by the dust and stars of the
Milky Way galaxy and were able to gain new insight into a
mysterious astronomical anomaly some 150 million light years
away.

Writing in a new study published by the Astronomical Journal, the
group says a third of the 883 galaxies they found behind our home
galaxy have never been seen before.

"The Milky Way is very beautiful of course and it's very
interesting to study our own galaxy but it completely blocks out
the view of the more distant galaxies behind it," according to
study lead author Professor Lister Staveley-Smith, from the
University of Western Australia, as quoted in a press release.

The scientists say their discovery may also help explain the
Great Attractor, which is described as a region of space that
seems to be pulling ours and hundreds of thousands of other
galaxies towards it with a gravitational force that's tens of
thousands of times more powerful than that of the Milky Way.


This is VOA Radiogram in MFSK32


Image: Artist's impression of the galaxies found in the "Zone of
Avoidance" hidden behind the Milky Way ...

SpaceX Rocket Set for Next Flight as Company Boosts Production

CAPE CANAVERAL, FLORIDA - Space Exploration Technologies, or
SpaceX, will attempt its second launch of the year this month, as
it ramps up production of its Falcon 9 rockets to handle more
than $8 billion of business for NASA and commercial companies,
officials said.

The next SpaceX launch is scheduled for Feb. 24, its customer,
SES SA, a Luxembourg-based satellite communications operator,
said on Monday.

"SpaceX is currently completing an extended series of testing and
pre-flight validation," SES said in a statement.

The rocket will be carrying the 11,700-pound (5,300-kg)
Boeing-built SES-9 communications satellite.

SpaceX declined to comment on the launch. But the Hawthorne,
California-based company, owned and operated by technology
entrepreneur Elon Musk, has said it hopes to fire off more than a
dozen Falcon 9 rockets this year, as well as debut a new
heavy-lift booster and a third launch U.S. launch pad.

"We're in this factory transformation to go from building six or
eight [rocket cores] a year to about 18. By the end of this year,
we should be at over 30 cores per year," President Gwynne
Shotwell told a Federal Aviation Administration commercial space
conference last week. A rocket core is the main body of a rocket.

The company successfully landed a rocket after a
satellite-delivery mission in December.

For the SES mission, the rocket will be out of range for a
landing attempt back at the Florida launch site, SpaceX said.

Instead, the company will try again to return the rocket's first
stage to a platform in the ocean. Three previous ocean-landing
attempts failed, although the last try in January came close. The
returning rocket touched down on the floating platform, but then
keeled over and exploded after one of its stabilizing landing
legs failed to latch.

SpaceX shot off five rockets in the first four months of 2015,
but stumbled during a June cargo run to the International Space
Station for NASA.

The recovered booster, which touched down on a landing pad at
Cape Canaveral Air Force Station, was test-fired last month.

The results sparked another round of rocket modifications,
Shotwell said.


Image: A long exposure photograph shows the SpaceX Falcon 9
lifting off (L) from its launch pad and then returning to a
landing zone (R) at the Cape Canaveral Air Force Station ...

In addition to being a successful artist, Renaissance genius
Leonardo da Vinci designed many practical machines, some of which
are still in use today, although in different forms. But a number
of his projects were never realized — until today, in an exhibit
at London's Science Museum.

It took a whole day for a team of museum technicians to assemble
a life-size model of a construction crane, built according to da
Vinci's 15th-century drawings. A quick demonstration testified to
its efficiency in moving heavy objects.

The genesis of some of the devices we use today can be seen in
sketches that da Vinci made. For instance, a wind-powered chariot
he designed was never built, but it incorporated gears, something
that we use every day in our cars.

"It is the drawing, the understanding and the imagination that is
important," said Jim Bennett, keeper emeritus of collections at
the Science Museum.

Fascinated by nature's solutions to complicated mechanical
problems, such as birds' flight, da Vinci envisioned contraptions
along the lines of the bat's skeleton. They did not work, but the
basic principle behind his parachute or the helicopter is still
valid.

"He said nature made the most perfect inventions. There is
nothing superfluous, there is nothing lacking," said Martin Kemp,
emeritus professor of art history at the University of Oxford.

Another revolutionary idea was a leather diving suit that's not
much different from today's heavy diving gear, together with air
supply hoses and waist ballast.

Studying mechanical principles, da Vinci designed many useful
devices, such as a machine for twisting ropes or a crane used to
build canals, that greatly improved the efficiency of Renaissance
craftsmen.

"It shows an aspect of Leonardo's sheer fertility of thinking,
this extraordinary inventiveness," Kemp said. "Whether he is
inventing disciples for a last supper or a flying machine, he has
got this amazing, amazing imagination."

The exhibition at the Science Museum will run until September 4.
It shows once more how much the great scientist, artist and
inventor was ahead of his time. 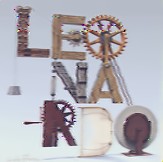 A reminder that the Winter SWL fest is 19-20 February at Plymouth
Meeting, Pennsylvania, a suburb of Philadelphia. Information at
swlfest.com.

If you are tuned in Saturday of this weekend, today is World
Radio Day.

For VOA Radiogram participation in WRD, follow these links ...

One of the themes of this year's WRD is "accessibility of radio
frequencies." From the WRD website, bit.ly/1RQznKB ...

The immediate accessibility of radio frequencies is
essential to saving lives. These frequencies should be
protected in times of emergency.

1. Radio frequencies and their accessibility during times of
emergency and disaster must be secured and assured. The
blocking of essential radio frequencies can harm lives and
prevent radio's ability to disseminate vital information.

2. The frequencies dedicated to radio broadcasting in an
emergency should remain free and accessible.

3. Radio broadcast frequencies can also become vulnerable in
times of emergency. States should have protection plans in
place for emergency radio frequencies.