Intro: The following broadcast of DigiDX is in the MFSK32 mode. To decode use FLDigi, MultiPSK or on Android the Tivar app.

Hello and welcome to the first episode of DigiDX, a weekly review of the latest shortwave and DX news broadcast on Channel 292 in the MFSK32 mode. Our broadcast times will be 2100 Tuesday night on 6070Khz. We are broadcast from Germany but the signal should be
receivable across Europe, the Middle East, North Africa and further afar.

The majority of the former Radio Moscow/Voice of Russia transmitters have been silent since Voice of Russia stopped broadcasting on shortwave in 2014. However the Russian Federal Service for Supervision of Communications (Roskomnadzor) has given a license for the
National Broadcasting Company Sakha station to broadcast using the Yakutsk transmitter in Siberia. Frequencies mentioned in the licence awards are 7295 kHz at 250KW and 7345 kHz at 100KW with daily broadcasts for 8 hours on weekdays and 10 hours at weekends.
Georgi Antonov Sergeev who is head of the online service of NVK Sakha has confirmed to DigiDX that broadcasts will start in either April or May.

From the 16th until the 20th of February there has been special broadcasts from the Ugandan Diaspora P10 group from 1630-1700UTC on 15405Khz. The programme has been in a mix of English and local languages and is in support of opposition candidate Kizza Besigye. On
the election day itself there was several broadcasts heard on the following frequencies:

The official results of the election declared incumbent president Yoweri Museveni as the winner,however the P10 group are contesting the results and it is possible the broadcasts could continue week commencing 22nd February 2016.
There has been some debate as to the transmitter used, with Nauan, Madagascar and Meyerton, South Africa possibilities.

Radio Oeoemrang’s yearly broadcast on shortwave was heard on 15215 Khz on 21st February 2016 across Europe and North America. Transmitted from Issoudun, France the yearly broadcast in the Frisian dialect of German and English celebrates a major Frisian holiday.
The first broadcast on shortwave was in 2006 and the station was founded by the radio amateur Arjan Kölzow on the island of Amrum in North Germany.
If you listened to Radio Oeoemrang you can request a QSL by sending an email to qsl-shortwave@mediabroadcast.com

Channel 292 are having a special offer during March allowing anyone to have a shortwave radio show broadcast on their 10KW transmitter in Germany. If you would like to get your broadcast on air then please send an email to info@channel292.de.

Radio Northern Ireland will be on Channel 292 6070Khz at various times week commencing 22nd February 2016. To see the Channel 292 schedule in full go to http://goo.gl/jzDHnK

Mighty KBC continue on 6040Khz from Nauan every Sunday from 0000 to 0300 UTC. The station have spoke about their financial problems recently, Eric van Willegen is looking for new sponsors and advertisers for the station and can contacted via www.kbcradio.eu and
www.facebook.com/TheMightyKbc.

MightyKBC also include a a minute of MFSK32 Sunday at about 0220 UTC to decode.


Gilles Létourneau who runs the excellent OfficialSWLchannel channel on Youtube has another of his weekly radio related Hangouts this week with his VHF/UHF/scanner radio hangout focusing on Trunking this week. To watch the hangout at 2100UTC on Friday 26th February or
any of his videos go to https://www.youtube.com/user/OfficialSWLchannel

Please send any reception reports, comments, radio reviews or suggested stories to reports@digidx.uk, starting from next week we will feature some of your letters and reception reports plus a special MFSK QSL card image within the broadcast.

We hope you have found this broadcast informative and that you will tune in next time. Now follows the latest Channel 292 schedule.


Be on the lookout for any businesses that might want to advertise
on The Mighty KBC.


Please report this decode to themightykbc@gmail.com

Welcome to program 151 of VOA Radiogram from the Voice of
America.

Astronomers say they have detected remnants of an atmosphere on
an exoplanet.

Writing in the Astrophysical Journal, researchers say 55 Cancri
e, which is about 40 light years away from Earth, has a
"significant amount of hydrogen and helium" left over from when
the planet formed.

"This is a very exciting result because it's the first time that
we have been able to find the spectral fingerprints that show the
gases present in the atmosphere of a super-Earth," said Angelos
Tsiaras, a University College London PhD student who helped
develop the analysis technique.

55 Cancri e is a so-called super-Earth because it is about eight
times the mass of our planet. but not as large as gas giants like
Jupiter and Saturn. 55 Cancri e has also been called the "diamond
planet" because the interior is thought to be rich in carbon.

A year on the planet lasts only 18 hours and temperatures are
thought to be as high as 2,000 degrees Celsius.

The astronomers were able to analyze the planet's atmosphere
using the Wide Field Camera 3, or WFC3, on the Hubble Space
Telescope and feeding the data into a computer to reveal
"spectral fingerprints" about the contents of the atmosphere.

"This result gives a first insight into the atmosphere of a
super-Earth," said UCL professor Giovanna Tinetti. "We now have
clues as to what the planet is currently like, how it might have
formed and evolved, and this has important implications for 55
Cancri e and other super-Earths."

In addition to hydrogen and helium, the astronomers say they
found the signature of hydrogen cyanide, which indicates a
carbon-rich atmosphere. 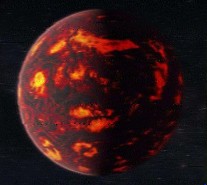 Boeing says it has developed and installed the first affordable
system for storing surplus energy from renewable sources.

Storing large amounts of electrical power for later use has
always been a problem, because existing batteries are unsuitable
for large-capacity storage.

Boeing says its new compact system uses surplus electricity to
extract, compress and store hydrogen, one of the most
energy-potent elements.

Upon demand, hydrogen is passed through the so-called "fuel
cells" where its energy is converted into electricity, with clean
water as the only byproduct.

The whole unit can fit in a standard 20-foot shipping container,
store up to 600 kilowatts of power and generate 50 kilowatts.

One unit is now installed in a U.S. naval facility in Port
Hueneme, California, for further testing and evaluation.

The new fuel cell-based energy storage, developed in cooperation
with German firm Sunfire, is suitable for military and commercial
applications.


Image: Upon demand, hydrogen is passed through the Boeing
system's "fuel cells" where its energy is converted into
electricity ...

(Refael Klein blogs about his year working and living at the
South Pole.)

In three weeks, Amundson-Scott station will close to flight
operations. There will be no more planes in or out and, for those
who have chosen to winter over, the South Pole will be their home
for the next eight months. No fresh fruit. No new people. No
change in topography. No escape. An endless, flat ice cap in
every direction, horizon to horizon.

A week of rest and recover (R&R) is given to those who will be
staying the winter. In the past, this meant a flight back to
Christchurch, New Zealand, to pick up last-minute supplies and
indulge in the warmth, humidity and greenery of the South Island.
Unfortunately, that's no longer the case.

Over the years, enough winter overs have decided to extend their
R&R permanently — preferring to quit their job and stay in New
Zealand rather than return to the South Pole — that R&R is now
held in McMurdo Station, located on the south tip of Ross Island
in Antarctica. Management says, "We don't want to risk another
winter without a plumber or electrician." I can't help but agree.

I was supposed to leave for R&R last Monday, but flying
conditions were poor so all flights were canceled. An LC-130 made
it to Pole the following day, but shortly after our 11 p.m.
takeoff, we were forced to return to base due to deteriorating
conditions at McMurdo. It's exceedingly rare for flights leaving
Pole to boomerang back and, from what I'm told, it's only
happened twice in the past decade.

A new flight was scheduled for Wednesday, but was canceled due to
limited visibility at McMurdo. The two flights that were supposed
to make it Thursday morning were delayed until the afternoon and
then canceled due to mechanical issues.

Meanwhile, the plane that had boomeranged sat idly off the runway
as mechanics worked on a slew of issues that can pop up when you
park a large plane in sub-zero temperatures overnight. By Friday
morning, I had come terms with foregoing my R&R. I unpacked my
bag, cleaned my room (it's more enjoyable to be forlorn on top of
a freshly-made bed), and headed off to work.

The morning was going as all other mornings do — daily instrument
checks, email, working on misbehaving computer programs — when a
scratchy voice came over our PA system: "Skier 51 will be
departing McMurdo for South Pole at 1600 estimated time of
arrival 2030." I was in disbelief; a new flight was scheduled for
us?

I called station communications to confirm the announcement. A
flight of distinguished visitors would be leaving for Pole in the
afternoon and would have room for additional passengers, like me,
to take back to McMurdo.

Distinguished visitors (DVs), such as congressmen, famous artists
and international dignitaries, routinely make their way to the
South Pole. They typically stay for only a few hours, taking a
quick tour of the station and its scientific facilities, before
walking out to the ceremonial and geographic pole markers for a
few glory shots.

According to station management, the DVs on this flight were all
high-ranking military personnel, including a four-star general
from the army who, among many things, was in charge of National
Guard flights in Antarctica. I couldn't imagine a flight he was
on being canceled or delayed. He would surely have the best plane
and flight crew at his disposal. The chances of getting out today
were high, but I still kept my fingers crossed.

The rest of the day I spent walking on egg shells, expecting an
announcement, at any moment, that the flight had been moved to
another day, or to be taken aside by the Winter Site manager and
told that the manifest had been changed and I was no longer an
outbound passenger. Nothing of the sort happened and, to my
surprise, at 2030, sea bag in hand, I boarded the LC-130.

I was one of the last passengers to board, so I sat towards the
front of the plane. Beside me sat the army general. He fumbled
for a pair ear plugs, pulled out two apples, looked around,
tapped me on my shoulder and offered me one. I respectfully
declined.

Image: A rare sight: two LC-130s at South Pole Station: the plane
I "boomeranged" on, and the plane that finally got me to McMurdo
(Rafael Klein photo) ... 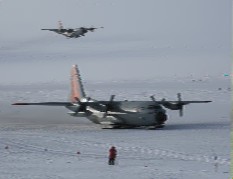 Greetings to everyone at the Winter SWL Fest in Plymouth Meeting,
Pennsylvania ...

One IF-radio-recording, but 3 x 3 possibilities of demodulation 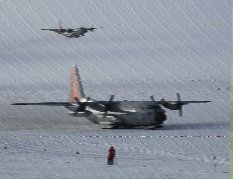