This is our new schedule of the weekly broadcasts to Italy and Europe.
Since this week there will be 3 hours of broadcasting every Wednesday on 6070 kHz, with new times,

and the last 5 minutes of transmission on 1584 kHz in MFSK32.
We invite you to listen to our new transmissions and send reception reports to our mail ibc@europe.com .
Of course we continue our broadcasts from Okeechobee FL, USA, with the usual schedule:
- EVERY FRIDAY 01-01.30 UTC on 9955 kHz
- EVERY SATURDAY 01.30-02 UTC on 11580 kHz
"IBC DIGITAL" is on the air last 5 minutes in MFSK32.
Good listening and decoding! 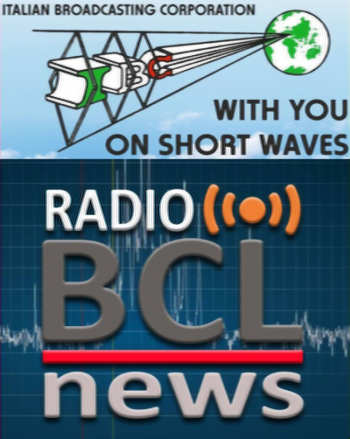 HAM NEWS - NOTIZIE PER I RADIOAMATORI


This webcam in Mierlo-Hout, Netherlands, includes a view of the
frequent NS trains ...

Welcome to program 183 of VOA Radiogram from the Voice of
America.

The following two stories are by Rick Panataleo in the VOA
Science World Blog, September 22, 2016 ...

Among the most mysterious objects in the universe are Lyman-alpha
blobs, or LAB.

A LAB has been described as a huge cloud of hydrogen gas in
distant areas of space.

The object’s name comes from the wavelength of UV light it
produces, called Lyman-alpha radiation.

Since its discovery in 2000, scientists have been stumped by what
causes an LAB to shine so brightly.

Studying SSA22-Lyman-alpha blob 1 or LAB-1 , one of the largest
objects found so far, a team of astronomers say they found two
galaxies at the object’s core that are forming stars at a rate
over 100 times that of the Milky Way.

Surrounding these two prolific galaxies is a swarm of smaller
galaxies, which the team says appears to be an early phase in the
formation of a massive galaxy cluster.

It’s thought all the star making activity may be producing the UV
light that illuminates the surrounding cloud of hydrogen gas.

The study is set to appear in the Astrophysical Journal.

Image: Computer simulation of a Lyman-alpha Blob 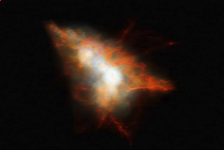 Almost every day, an asteroid passes within a few million miles
of Earth.

If the cosmic debris that whizzes past our planet worries you,
you may want to check out a new information service from the
International Astronomical Union’s Minor Planet Center, along
with technology giant Oracle.

Called the Daily Minor Planet, a nod to Superman’s fictional
“Daily Planet” newspaper, this free subscription-based service
will provide what is described as up-to-the-minute information
about near Earth asteroids both big and small.

Representatives from Daily Minor Planet say on days when a piece
of space rock is expected to fly by Earth, the news service will
list information about the asteroid, along with the time and
distance of its closest approach.

Matt Holman, director of the Minor Planet Center says he wants
the Daily Minor Planet to educate readers and provide an
entertaining way to present facts about near Earth Asteroids.

Anyone versed in the arcana of science fiction knows about the
significance of Europa, a moon of the planet Jupiter. Scientists
have always considered it to be one of the best places in our
solar system to look for life because chances are Europa has a
salty, reasonably warm ocean of liquid water underneath its icy
surface.

It's significant to science fiction fans as well because Europa
was the one place the highly advanced aliens in Arthur C.
Clarke's 2001 series said humans were not allowed to visit,
because it contained primitive lifeforms with evolutionary
potential.

The real science world of astronomy has been buzzing since last
week, when NASA announced it was holding a teleconference
"related to the presence of a subsurface ocean on Europa" and the
Internet has been wild with speculation about everything from
oceans to aliens.

Well, the bad news first: it's not aliens.

The good news, announced Monday, is that it may be much easier to
search for life if we get to Europa. NASA says images from the
Hubble Space telescope suggest there are giant salt water geysers
shooting plumes of water high into the atmosphere which rains
back down to the surface. Think of it as an interplanetary Old
Faithful.

These plumes, if NASA can actually prove their existence, are
much different than what we think of as geysers. First, they are
reaching up to 200 kilometers into the atmosphere of Europa.
Secondly, they aren't faithful at all. In a news conference, the
scientists on the project said the plumes come and go and Hubble
could only sometimes capture images of the plumes. A team also
discovered some evidence of plumes back in 2012, but neither team
has been able to confirm each others' work.

That led the scientists at Monday's teleconference to emphasize,
"We aren’t saying we have proven that plumes exist." William
Sparks from the Space Telescope Institute clarified, "only that
we have added to the information that suggests that they exist."

The ocean on Europa is massive. While it is just a bit smaller
than our moon, scientists believe its subsurface ocean holds
about twice as much water as we have here on Earth. And the
University of Georgia's Britney Schmidt, one of the researchers,
isn't quite sure how the water is breaking through the ice that
separates the ocean from the moon's surface.

"We have lots of hypotheses to look into" she said, but added
that future missions will have to confirm both the existence of
the plumes and how that water is getting to the surface.

That means that if we can visit and confirm the presence of these
geysers, then we'll be able to study what the ocean is like by
scraping geyser ice off the surface instead of having to drill
through kilometers of ice to test the waters.

Europa would become the second moon in the solar system known to
have water vapor plumes. In 2005, NASA's Cassini orbiter detected
jets of water vapor and dust spewing off the surface of Saturn's
moon, Enceladus.

Confirming the plumes is NASA's next job, and scientists may use
the infrared vision of NASA’s James Webb Space Telescope,
scheduled to launch in 2018, to confirm venting or plume activity
on Europa.

NASA also is formulating a mission to Europa with a payload that
could confirm the presence of plumes and study them at close
range during multiple flybys.


3 States Sue to Block Transfer of US Internet Control

AUSTIN, TEXAS - Three conservative states are suing the Obama
administration in an attempt to block the U.S. government from
ceding oversight of some of the internet's core systems.

The attorneys general of Texas, Oklahoma and Arizona on Thursday
asked a federal court in Galveston, Texas, to keep the Commerce
Department from relinquishing oversight of ICANN, or the Internet
Corporation for Assigned Names and Numbers.

The internet relies on the "domain name" system. That includes
directories helping computers on the network send data. ICANN has
overseen the directories since 1998.

Texas Sen. Ted Cruz and others opposed the transition, which was
approved by Congress in a temporary spending bill keeping the
government running. The lawsuit says ceding control of ICANN
violates the Property Clause of U.S. Constitution, which
restricts giving away government property.