The KBC ship at Harlingen, the Netherlands, with flags of a tall
ship in the foreground ...

Welcome to program 215 of VOA Radiogram from the Voice of
America.

CAPITOL HILL - U.S. senators of both political parties piled on
in defense of America's role as a human rights advocate, one week
after Secretary of State Rex Tillerson suggested that a values
based outreach to the world hinders U.S. national security goals.

"America's strength is in our ideals, our values: speaking up for
democracy, speaking up for human rights, anti-corruption and
embracing diversity," said Democratic Senator Ben Cardin of
Maryland.

"So many of the groups around the world who are fighting for the
principles that we as a nation stand for – democracy, a free
press, freedom of religion, freedom of expression – they look to
America for inspiration," said Republican Senator Marco Rubio of
Florida.

Both lawmakers spoke Tuesday at a hearing of the Senate Foreign
Relations Committee, one day after Republican Senator John McCain
of Arizona penned an opinion piece in The New York Times
newspaper in which he accused Tillerson of turning his back on
decades of American human rights advocacy on the world stage.

"With those words, Secretary Tillerson sent a message to
oppressed people everywhere: Don't look to the United States for
hope," McCain wrote. "[I]f you happen to be in the way of our
forging relationships with your oppressors that could serve our
security and economic interests, good luck to you. You're on your
own."

McCain wasn't alone in his criticism.

"Leading with our values, including prioritizing human rights in
our diplomacy, is a critical part of promoting our national
security," said Democratic Senator Robert Menendez of New Jersey.
"I am really concerned about Secretary Tillerson's comments."

Sullivan attempted to reassure senators he understands their
concerns.

"I'm committed to making the State Department the preeminent
force to protect American values and promote American values in
the world," the nominee said at his confirmation hearing.


China to Strengthen Its Controls Over the Internet

Xi has made China's "cyber sovereignty" a top priority in his
sweeping campaign to bolster security. He has also reasserted the
ruling Communist Party's role in limiting and guiding online
discussion.

The five-year cultural development and reform plan released by
the party and State Council, or Cabinet, calls for a perfecting
of laws and rules related to the internet.

That includes a qualification system for people working in online
news, according to the plan, carried by the official Xinhua news
agency.

Xi has been explicit that media must follow the party line,
uphold the correct guidance on public opinion and promote
"positive propaganda."

The plan comes on top of existing tight internet controls, which
includes the blocking of popular foreign websites such as Google
and Facebook.

The government last week issued tighter rules for online news
portals and network providers. Regulators say such controls are
necessary in the face of growing security threats, and are done
in accordance with the law.

Speaking more broadly about the country's cultural sector, the
plan calls for efforts to reinforce and improve "positive
propaganda." The plan also calls for more effort to be put into
promoting China's point of view and cultural soft power globally,
though without giving details.

The website for the Federal Communications Commission has come
under attack.

Initially, the problems were believed to have been caused by
comedian John Oliver, who on Sunday urged his viewers to leave
comments on the site about the FCC's plans to revisit net
neutrality rules.

Net neutrality rules were implemented in 2015 and required
internet service providers to treat all traffic equally. New FCC
chairman Ajit Pai has said he will review the rules, arguing they
are "holding back investment, innovation and job creation."

The FCC, which "regulates interstate and international
communications by radio, television, wire, satellite, and cable,"
says the website attacks were coordinated, distributed denial of
service attacks, not a surge in traffic.

"These actors were not attempting to file comments themselves,
rather they made it difficult for legitimate commenters to access
and file with the FCC," chief information officer David Bray
said. "While the comment system remained up and running the
entire time, these distributed denial of service events tied up
the servers and prevented them from responding to people
attempting to submit comments."

On his show, "Last Week Tonight," Oliver said, "Every internet
group needs to come together ... gamers, YouTube celebrities,
Instagram models, Tom from MySpace if you're still alive. We need
all of you," he said.

The FCC will vote on net neutrality rules on May 18. 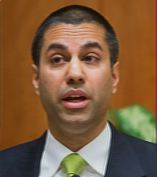 Operators from the US Naval Academy Radio Club (W3ADO) and the
Potomac Valley Radio Club (W3GRF) will reactivate the historic
NSS call sign on May 13-14 during the Armed Forces Day Crossband
Military/Amateur Radio Communications Test.

NSS began operation in 1918 as the Annapolis High Power Radio
Station using a Federal Telegraph Company 500 kW arc transmitter
and four 600-foot towers, operating in the VLF spectrum. NSS HF
operation began about 10 years later, although VLF operation
continued into the 1990s. The HF mission was transferred in 1976
to NAM in Norfolk, Virginia. While some of the towers were
removed, three lighted, self-supporting towers remain, to serve
as local landmarks and as navigation aids to boaters on
Chesapeake Bay.