This panda at the Calgary Zoo enjoys the past week's early snow
in Alberta ...

Welcome to program 68 of Shortwave Radiogram.

We begin with another test to reduce the slant of your decoded
MFSK images.

If the first image, an orange rectangle, shows a green triangle
on the left, try an RX ppm correction of (+)100 ppm and continue
with smaller adjustments until the slant is eliminated.

If there is a purple triangle on the right, try a correction of
-100 ppm and adjust from there.

Invasive zebra mussels have rapidly colonized the Rideau River
including the Rideau Canal, a UNESCO World Heritage Site located
in the nation's capital, Ottawa. A study published in the
Canadian Journal of Zoology is said to be the longest-know
monitoring study of this invasive species in a small river
system.

Zebra mussels were first found in the Rideau River in 1990. After
monitoring them over two decades there are areas where there are
hundreds of thousands of mussels in a square metre.

"The increase in their numbers in the early years was just
stunning," said the study's lead author, Dr. Andre Martel of the
Canadian Museum of Nature in a news release. "This long-term
study shows that the species was quick to establish itself and is
here to stay."

Zebra mussels first arrived in Lake Erie at the heart of North
America in 1986. They originated in the Caspian Sea region of
Europe. Females can produce up to one million eggs per year. The
mussels often spread by attaching themselves to boats.

They outcompete native mussels for food and attach themselves to
hard surfaces including boulders, rock and filtration pipes.

The Rideau River is a popular waterway for boating, fishing and
other recreational uses.


Image: The Rideau Canal in Ottawa ... 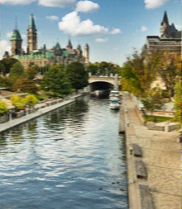 This is Shortwave Radiogram in MFSK128


WASHINGTON - It's hard to miss some of the trash and recycling
trucks rumbling through the streets of Washington. Twenty five of
them are covered with colorful artwork, ranging from birds,
flowers and butterflies to abstract images.

As some sanitation workers do the dirty job of dumping trash into
one of those trucks, their job is made a bit more pleasant by
rolling along with Shelby, the name of one Department of Public
Works trash vehicle bearing vibrant abstract art.

"It is real fun. It gets us more attention. I like the
attention," said truck driver, Sanders Wright.

Wright is proud of the truck, which is wrapped with a vinyl copy
of an original painting, highlighted with the head of a woman
with one eye, a house and a bird. Wright, who is married with 11
children, said he'd never reveal who Shelby is named after but he
has been riding with the truck for several years. His only
criticism of the painting is that he wishes Shelby had two eyes.

Shelby and some of the other art-covered trucks began hitting the
streets five years ago. They are part of a city initiative to
promote recycling, while showcasing local artist talent. The
original paintings, drawings and mixed media are copied onto
large pieces of vinyl that are placed on the trucks.

"It is pretty cool," said one woman who brought out her trash
can. "Adds some color to the neighborhood."

Wright said people have become friendlier since the art
initiative began, getting to know the workers by name and even
bringing them cookies and other treats.

"It makes you feel good that you have some citizens come out or
the children say, 'Hey, that is a nice truck. I like that art. I
like your truck.' And you just toot the horn or wave to them
thank you."

"I think the art design of the truck is really nice," said a
Washington resident from Senegal who takes a moment to admire
Shelby. "It is another opportunity for an artist to show what he
can do."

And that includes artist Michael Crossett, who back at the yard
where the trucks are parked, is looking at a truck that was
recently wrapped with one of his paintings.

Crossett likes the publicity his painting of a gritty urban
landscape of Washington in mostly red and black will get. He's
pleased the image will be seen in "diverse communities all over
the city," noting it will get more exposure than it would in an
art gallery.

Crossett painted the original image over photos of the city that
include the U.S. Capitol and a Metro train.

"It is actually a combination of probably 250 images," Crossett
explained. "Then it was digitized to be placed on the truck."

He said the painting shows the vibrancy of Washington.

"The international view of Washington, D.C. is so political, and
it is a different world when you live here, so my paintings
generally show the street life and the energy that is D.C.," said
Crossett.

The artist said he welcomes the predictable dirt and trash on the
painting.

"I actually use images of grit or images of concrete to gritty up
my work, so in the end, I think this is the perfect kind of
marriage, where some trash will add to the color of my art,"
Crossett said and laughed.


Image: An example of an art-covered recycling truck, from
bit.ly/2xYqCcn ...

The Ocean Cleanup Project announced Wednesday that its System
001, which departed San Francisco on Sept. 8, is now back in
towing configuration and is on its way to the Garbage Patch. The
system is being towed by the Maersk Launcher, made available to
the project by A.P. Moller-Maersk and DeepGreen, its current
charter holder.

System 001 consists of a 600-meter-long (2000 ft) U-shaped
floating barrier with a three-meter (10 ft) skirt. It could be
the first of 60 systems focused on removing floating plastic
debris from Great Pacific Garbage Patch, located some 1,200
nautical miles offshore, over the next two years.

The system is designed to be propelled by wind and waves,
allowing it to passively catch and concentrate plastic debris in
front of it. Due to its shape, the debris will be funneled to the
center of the system. Moving slightly faster than the plastic,
the system will act like a giant Pac-Man, skimming the surface of
the ocean.

Situated halfway between Hawaii and California, the Great Pacific
Garbage Patch contains an estimated 1.8 trillion pieces of
plastic and covers an area twice the size of Texas. It is
believed the world's largest accumulation zone of ocean plastics.

While the main objective of System 001 is to prove the technology
and start the cleanup, a secondary goal is to collect performance
data to improve the design for future deployments. The system is
also equipped with solar-powered and satellite-connected sensors,
cameras and navigation lights to communicate the position of
System 001 to passing marine traffic, and enable extensive
monitoring of the system and the environment.

After delivery of the system to the Great Pacific Garbage Patch,
the Maersk Launcher will remain active as an observation platform
for several weeks.

If all goes according to plan, The Ocean Cleanup estimates the
fleet of systems, strategically positioned, could remove half of
the plastic in the Great Pacific Garbage Patch within five years'
time.

Image: Ocean Cleanup Project's System 001 during sea trials off
the coast of California with the Maersk Launcher ... 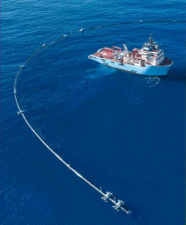 
A replica of Air Force One is transported by barge on the Potomac
River to National Harbor, just south of Washington DC, where it
will be displayed. From bit.ly/2zSITsZ. See also bit.ly/2pCvwaF
...

Calgary, Alberta, experienced an early snowfall this past week.
From bit.ly/2IFAD2D ... 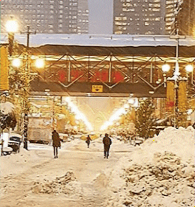 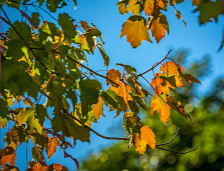 Our painting of the week is by Jenny Bagwill. From bit.ly/2zRUgSe
... 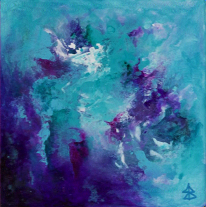 "....I am sorry to say that because of some minor health problems, I had to cancel this week’s and next week’s Slow Scan Radio (October 3 and October 10)."